Photos from the World Premiere of Tag have been added to the gallery. 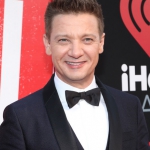 Kids Answer Questions for the Cast

When you’re a lead of a movie that requires you to perform some pretty slick stunts, the last thing you want to do is break not one, but both of your arms on the second day of filming. And yet that’s exactly what happened to Jeremy Renner on the set of upcoming action-comedy Tag, about five adult friends who have played the same game of tag for three decades with Renner’s character as the one who has evaded being tagged each year.

After Renner’s costar Jon Hamm told the story of Renner’s injured arms being CGI’d last week on The Ellen DeGeneres Show (and made sure to reiterate that he had no part in the incident), some people have been speculating about exactly how much of Renner’s Tag performance required visual effects.

In an April interview for EW’s annual Summer Movie Preview, Renner said he was filming a sequence that involved 20 to 30 chairs stacked about 20 feet high inside of a community hall, in a stunt that saw him being chased by Hamm and fellow cast members Ed Helms, Hannibal Buress, and Jake Johnson and racing up the stacked chairs in an attempt to escape. Renner told EW in an April interview that the rigging on the chairs broke and “I broke along with it and fell on the ground and broke my arms.”