The Academy Award nominated actor opens up to Mickey Rapkin about fatherhood, losing his virginity, and that one time he worked as a makeup artist 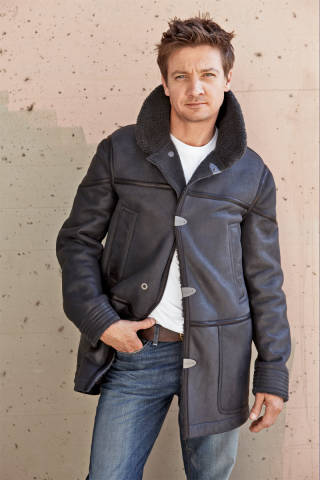 In more ways than one, Jeremy Renner was a late bloomer. Kicking around L.A. since 1993, long before The Hurt Locker’s surprise win for Best Picture—accompanied by his nomination for Best Actor—at the 2010 Academy Awards, he supported himself with a series of odd jobs between acting gigs. How odd? Well, he’s probably the only member of The Avengers to have worked as a makeup artist at the Lancôme counter. (Really.) But persistence clearly paid off in spades—and accolades. After scoring a second Oscar nod for his tightly wound work in The Town in 2011, the Modesto, California, native finds himself on the award trail again this winter with American Hustle, David O. Russell’s follow-up to Silver Linings Playbook. The film, a true-life con-man story, stars Bradley Cooper as a 1970s FBI agent working a sting operation, and Renner as the honorable (but duped) mayor of Camden, New Jersey. The period-perfect retro styling wasn’t the only change Renner encountered while filming Hustle. He and his girlfriend, model Sonni Pacheco, also welcomed a baby girl. Here, the 42-year-old actor talks fatherhood—plus strip clubs, marriage, and losing his virginity.