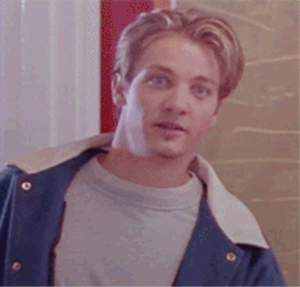 The Net was a U.S. drama series that aired on the USA network during the 1998-1999 season.  The series was a spinoff of the 1995 hit movie starring Sandra Bullock.  It centers around Angela, a computer analyst who, after receiving a package in the mail from a client, finds her life turned upside down when the FBI accuses her of being Elizabeth Marx, a woman wanted for fraud, extortion, and treason.  Angela, now on the run from both the FBI and a virtual organization known as the Praetorians, seeks to discover the identity of the Praetorians while fighting to have her real identity -- and life -- returned to her.  Her only ally is an online presence known only as "The Sorcerer."

Jeremy guest stars in episode 2, entitled "Chem Lab."  He portrays Ted Nida, a resentful high school student whom Angela suspects is involved in a chemical attack on a farmer's horses.

The Net is not currently available on DVD.  You may view "Chem Lab" below:

Thanks to Samantha for submitting this summary!