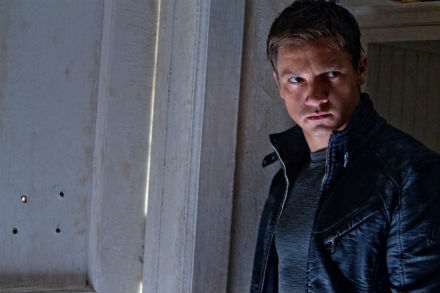 JEREMY RENNER seems to appear out of nowhere. Maybe he really is a super-agent like the one he plays in The Bourne Legacy, the fourth film in the franchise.

Quickly saying a warm hello to the film’s writer-director, Tony Gilroy, Renner joins him at a table at a Beverly Hills hotel. The Bourne Legacy, which opens Friday, is notable because it does not star Matt Damon as the fugitive Treadstone operative. Instead, Renner plays Aaron Cross, another enhanced agent who is also part of the secret government program.

Another interesting twist is that Cross’s story takes place at the same time as the third movie; so it is not a complete reboot of the series.

After the success of 2007’s The Bourne Ultimatum, Universal had been anxious for a sequel, but for whatever reasons — creative differences, the general description — Damon wasn’t ready to do one.

“A lot of people tried to figure out how to go forward after Ultimatum, which was such a nice package,” says Gilroy, who wrote the other three films. “So they came up with the idea of having a larger conspiracy with Ultimatum playing in the background.”

Therefore, a lot of characters in that film have minor roles in the new chapter.

For Renner, Legacy is the latest in a string of action films he’s starred in, including The Town, Mission: Impossible – Ghost Protocol and this summer’s first big hit, The Avengers.

“It just kind of happened that way. I just couldn’t say no really to them,” says the 41-year-old actor, who grew up in Modesto. “As far as the dramatic elements that I needed to be challenged with them, they were all there. This particular movie was no different. It was an opportunity I couldn’t pass up.

“But I can guarantee that whatever my next project is, it’s not going to be an action film,” he adds with a laugh.

Despite going in a different direction, Legacy has many things in common with its predecessors, especially that it isn’t “really a big green-screen project at all,” notes Gilroy. “It’s based on reality, that’s the flavour, the character of the three films. That’s one thing we couldn’t deviate from.”

That meant that Renner’s Aaron Cross has a lot of action scenes.

“I love it,” says Renner about doing most of the demanding stunts in the film. “It’s also important for the picture. I wouldn’t do these things in my daily life. I’m not even much of an adrenaline junkie by any means. I only ride a motorcycle and that’s not such an adrenaline thing as it is peaceful. But what a great opportunity it is to learn something new. If I’m physically able to do the stunts, I’d be a jackass for not doing them, because authenticity is important to this film.

“I’m an audience member, too,” he adds, “so I appreciate it when I watch a movie that doesn’t suspend belief.”

Renner says he did not talk to Damon about playing an agent in the Bourne franchise before signing on but wasn’t out to replace the star.

Cross, like Bourne, is an agent alone in the world. While we first meet him in a frozen wilderness going through rigorous training in solitude, his motivation is very different from Jason Bourne’s.

“The most important thing in this picture for me was to find the fuel that drives this person to do the things he does — what separates him from everybody else?” says Renner, who credits the script from Gilroy and his brother, Danny, with giving him a good start.

The director says it took a while for him and his star to find their rhythm.

“It was a feeling-out process,” Gilroy says. “I think our real conversation started almost three weeks after we started filming. There’s a trust that you have to have …”

“ that is huge,” says Renner, completing the thought.

Gilroy says a key for any filmmaker is to know when to let the actors go with their instincts.

“Fear kills creativity,” says Renner. “Tony and I, we pretty much had trust from the get-go.”

Settling into the director’s chair for Legacy was not something that Gilroy — who is primarily known as a screenwriter (Armageddon) — expected to do, although he was nominated for an Oscar for his first directing effort, the 2007 film Michael Clayton.

“It came about incrementally,” Gilroy explains. “I wanted to try to do a big movie before I got too old, and I was looking for something that was interesting enough to invest two years of my life, and this was it.”

One of the things that intrigued Gilroy was when they came up with a Flowers for Algernon aspect to Cross’s character, which we won’t reveal more about for moviegoers who want to be surprised. “That’s the point when I got excited about doing the movie,” says the filmmaker.

Renner agrees, saying without that dramatic element in Legacy, the story might not resonate with the audience.

Working in Hollywood is not an unexpected career path for Gilroy, although his father tried to discourage it. That, obviously, didn’t work. His father is Frank D. Gilroy, who in 1965 won a Tony Award and Pulitzer Prize for his play The Subject Was Roses.

“My father moved us away from Los Angeles when I finished kindergarten because he didn’t want us to have anything to do with (the film business), to upstate New York,” says the 55-year-old director.

Gilroy says his parents continue to live there, and that his father — who also worked in television, Hollywood and independent film — is still writing at 86, publishing two ebooks recently.

“He’s a firecracker, unbelievable,” adds Renner, who calls his own father one of his heroes.

“He’s a friend and a mentor. He fulfills a lot of roles for me,” says the actor about his dad.

Renner, who had worked steadily in film, stage and TV for almost two decades, really came to the public’s attention for his 2009 Oscar-nominated role as a bomb disposal expert in The Hurt Locker.