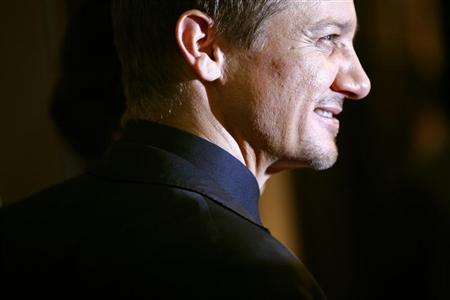 Cast member Jeremy Renner attends the premiere of the film

(Reuters) - Film franchises have seen prequels and sequels but when Matt Damon decided not to return for a fourth stint as rogue CIA agent Jason Bourne, producers opted for something different - the "same time-quel."

"It's not a prequel or a sequel, it's the same time-quel," franchise producer Frank Marshall told reporters.

"There was a misconception that Jeremy was replacing Matt," said Marshall. "That was the one thing we wanted to make clear - they're different agents. Bourne is still out there and Aaron Cross has now come in."

The Bourne series, loosely based on Robert Ludlum's novels, launched in 2002 and the first three movies grossed more than $945 million at the worldwide box office for Universal Pictures and made an action star out of Damon.

Damon played a CIA assassin with memory loss who tries to discover his true identity while evading the CIA, which is out to kill him.

"The Bourne Ultimatum" ended with Bourne evading capture while publicly exposing the CIA programs that trained him. In the new movie, the man responsible for creating those programs, Colonel Eric Byer (Edward Norton), decides to destroy six genetically enhanced agents - including Cross, a character who does not appear in the Ludlum novels.

The new movie follows Cross' attempts to escape his CIA pursuers while enlisting the help of genetic scientist Marta Shearing, played by Rachel Weisz, for the medications he desperately needs to stay enhanced.

"The coolest thing is that we make a phone call from the last movie in to this movie," Marshall said, adding that Jason Bourne is referred to and discussed in "The Bourne Legacy," while franchise veterans Albert Finney, Joan Allen, David Strathairn and Scott Glenn are back in their original roles.

The film is directed by Tony Gilroy, who worked as a screenwriter on the previous three films and co-wrote "The Bourne Legacy" with his brother Dan Gilroy.

Renner credits the physical training he had to do for "Mission: Impossible - Ghost Protocol" and "The Avengers" as giving him a running start for the physical demands of the movie, which relies more on realism than special effects.

"I was wanting to do as much (physical work) as I possibly could because of the responsibility of the authenticity of the three films prior," Renner, 41, told reporters.

That included a motorcycle chase on the crowded streets of Manila and being submerged bare-chested in icy waters in the Canadian Rocky Mountains during the winter months.

"His physicality made a huge difference to us," said producer Patrick Crowley. "Because that allowed us to put him in situations where you could see him fight or see him ride a motorcycle. With other people, you would have to do a green screen or some kind of face replacement."

Crowley also felt that Renner had an accessibility and vulnerability to him, while also being a relative newcomer to fans of mainstream films despite his work in smaller-budget films like "The Hurt Locker," "The Town," and "28 Days Later."

"Audiences haven't formed their opinions about Jeremy Renner," said Crowley. "He's still sort of evolving from the audience's perception. 'Who is this guy?' 'I want to see more of him.'"

If the film follows the success of its predecessors, chances are audiences will see more of Renner as Cross.

"I'm excited that the architects and the creators behind this whole (franchise) have cleverly left it wide open for fans like myself, wondering what the heck is going to go on next," said Renner.