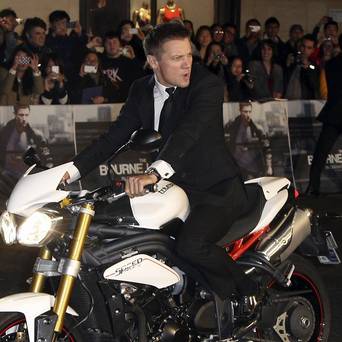 FANS lined the streets at the Australian premiere of The Bourne Legacy, as Jeremy Renner zoomed up on a motorcycle.

Renner, an avid motorcyclist, says his arrival was a nice excuse to drive on Sydney's streets.

Renner is no stranger to action roles, having appeared in The Avengers, The Hurt Locker and Mission Impossible: Ghost Protocol, and he says he did the majority of his own stunts in the new Bourne film.

However, while sightseeing on his first trip in Australia, Renner has chosen to stay more low-key, leaving the adrenaline-junkie activities for when he's making films.

"I'm not really running around, jumping off buildings or anything," he says. "I went to the zoo."

Renner plays agent Aaron Cross in The Bourne Legacy, the fourth film in the franchise and the first without Matt Damon starring.

Unlike Damon's Jason Bourne, Cross is more spy than assassin and from a different CIA program, although the events in The Bourne Ultimatum are what trigger his story into action.

It's written and directed by Tony Gilroy, who was a writer on the first three films and who walked the red carpet with Renner outside the State Theatre in Sydney's CBD on Tuesday night.

Gilroy says when Matt Damon and director Paul Greengrass walked away from the franchise, he read it in the paper like everyone else.

"It really wasn't part of my life at that point," he says.

"I'd been in and out of this for 13 years, so I watched with interest as everybody else did."

Since making The Bourne Legacy, Gilroy is now waiting to see what the fans think before he even starts thinking about continuing the franchise.

"There's a limit to how much you can talk it up and I think we're at the limit," he says.

"In a few days it'll be time for the audience to get their hands on the movie and they'll tell us what to do."

So does he think Australia would be a good location to use for a future Bourne film?

Gilroy doesn't know yet, but he says this visit has been too short and if he had the opportunity to come back and film for a few months, he would take it.

"This is an extraordinary city and that's not just like throwing you a line, it's an amazing place," he says.

"I look forward very much to coming back here and I think the best way to come back to a place like this is to work here ...

"You've got a great situation here. You really do."