From sleeping in his car to Oscar nods, the Bourne Legacy star's life has played out like a blockbuster plot, says Andrea Hubert. 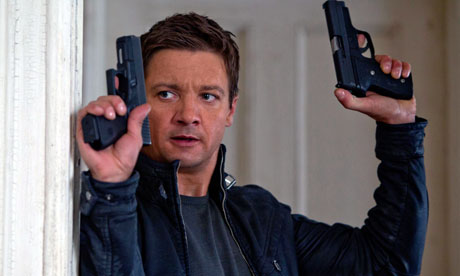 When you think of a Hollywood "character actor", he's usually the fat best friend, the odd-looking serial killer, or the surprise turncoat – he provides a foil for comedy, pathos and action. But rarely do character actors get to morph into A-list stars, which is what makes Jeremy Renner's success so refreshing. Renner, who boasts a similarly sexy, lopsided non-handsomeness as Daniel Craig, has a proven track record for elevating sidekick characters far above their intended station, a trait that makes his leading role as Aaron Cross in The Bourne Legacy one of the most highly anticipated action events of the summer.

Renner's enviable knack for making a good guy bad (and a bad guy good) is the reason he's here in the first place. It was his lazily charming portrayal of a notorious serial killer in the indie film Dahmer which caught the eye of Kathryn Bigelow, who went on to cast him in the star-making The Hurt Locker. Not bad for a little-known character actor who'd been grinding at the Hollywood mill for the best part of 15 years.

"I don't really think there's much difference between a character actor and a leading man besides aesthetics," Renner says. Hugely jetlagged, he speaks in a slow, uncalculated drawl, without a hint of hesitancy that comes with the usual guarded A-list responses. "So-called character actors usually have supporting roles, which means that you have less colours on the palette to paint a three-dimensional character. So the depth comes from them having had a life, and bringing that to these smaller roles. But with lead roles, like Aaron Cross, you still do that – it's just a bit easier."

Renner has certainly had a life. He was a jobbing actor for years before Bigelow gave him a golden ticket as the unhinged Sergeant William James, a role for which he was duly Oscar-nominated. His recent leading man status is the result of a body of work that made him the poster boy for twisted, multi-layered, morally ambiguous heroic villains. I first came across him in an episode of Joss Whedon's Angel from 2000, in which he played a sadistic vampire with a chilling signature stamp. He managed, as is his speciality, to infuse a cartoonish murderer with myriad shades of light and dark, an ink with which he's determined to stain every role.

It's most prevalent in The Town, where he imbued a potentially two-dimensional supporting role of showy brutality with a meditation on the nature of loyalty. His intensity is never less than unforgettable, even if many of his films (The Heart Is Deceitful Above All Things, 12 And Holding) are not.

"Do I deliberately add moral ambiguity? Of course. If it's not in it, I put it in. Nobody wants to watch a good guy do good shit where nothing bad ever happens." It's clear this is a man for whom the study of characterisation is an art form. "We respond to change, to complexity, to interesting storytelling. There is nothing new, from Greek mythology to Shakespeare to every romcom ever made, we're just reimagining the same 12 story plots over and over again – so what makes people keep watching and listening? It's all about the character. And when villains have empathy, there's your movie."

Now a household name, Renner's ascent was the classic long, winding road of countless auditions, rejections and increasing poverty. It's presumably why the prospect of a fat paycheck is less alluring than the promise of a complex role, however small. "Yes!" he agrees. "Put me in tights, put me in a dress, I don't care. I don't want to play a bad guy who doesn't have a bit of good in him."

It is, perhaps, the privilege of the mentally staunch latecomer to become increasingly picky, not less. In an episode of comedian Marc Maron's WTF podcast, fellow late-bloomer Jon Hamm discussed the pursuit of a dream while nearing your mid-30s, and what it takes mentally to prepare yourself for the possibility that you might never make it.

Renner nods. He can relate. Now 41, after a decade of cancellations and bit parts, he was living without electricity when The Hurt Locker landed in his lap.

"I was still struggling financially. I was living without any power and about as broke as broke gets. But I never thought about giving up, not even once. It just gives you more fuel for the fire, you know. And things turned out all right."

All right is an understatement. Twice Oscar-nominated (for both The Hurt Locker and The Town), Renner has since served a thinking-action-man's apprenticeship, moving smoothly from The Avengers to an internship with old-hand Tom Cruise in Mission Impossible: Ghost Protocol. And now, the denouement of his action adventures – The Bourne Legacy, a predictably stylish slice of relentlessly high-octane action that extrapolates on the ideas of identity and morality explored in the original series. Renner's steely, intelligent execution recalls the thrilling silent strength of a young Steve McQueen, his menacing presence a perfect fit for the role. The less surefooted of his peers might have hesitated to step into the Bourne/Damon shadow, but one benefit of late success is the wisdom to differentiate the bad from the good decisions – and Renner has no intention of mis-stepping now.

"If I'd been approached and asked to play Jason Bourne, it would have been a really easy 'no'. But this movie wasn't about filling Matt Damon's shoes." Renner is endearingly earnest now, determined to be clear on this point. He respects the sanctity of the franchise. "It was a brand new canvas, and a brand new story. So the only pressure was to be able to perform in the style and physicality and ferocity of the action that had been established in the first three films. Because that is something that you cannot fake."

Renner first realised he was seriously famous in a series of (his words) "pinch-me" moments that began shortly after he was nominated for an Oscar for The Hurt Locker. "One minute I'm homeless. The next I'm still homeless, but I'm in a tuxedo, on my way to the Oscars, stopping at a coffee shop to brush my teeth because I don't have running water. The next minute, Jack Nicholson, someone I've admired my entire life, is right in front of me saying my name. Then he's saying the names of two movies I did and I'm like, 'Jesus, all I wanted to do was be in a movie that would play in a big enough theatre that my family would get to see it. And now this.' What can I say? It's weird."

Renner is irritated be the idea that people get into acting because they want to be famous. "I know it's a cliche but I never wanted to be famous. I don't believe anybody wants to be famous." But now that he is, Renner has had to endure the usual scurrilous rumours, including the ones about him and his best friend, with whom he operates a successful real estate business. Renner sighs.

"I talked to some other friends of mine about the rumours when I first heard them. I said, 'Have you seen this?' and they were like, 'Dude, do you know how long that's been online?' Look up any actor and it's the second thing that comes up. So I have gay rumours – guess I've made it!"

Renner is charmingly candid – no media-trained platitudes or overly-supportive spew in sight. It's refreshing. When we talk about the pitfalls of fame, I mention the Kardashians and he doesn't hesitate to roll his eyes and make his disdain crystal clear. "Oh, all those ridiculous people with zero talent who spend their lives making sure everyone knows their name. Those stupid, stupid people." He's also clear about what he considers a good, bad or painful interview.

"I know I have to do this stuff, and that's fine," he says, warming suddenly to the subject after a pretty languid half-hour. "I get that it's part of the job. But when you have to answer stuff like, 'So if Hawkeye and Jason Bourne got in a fight, who would win?' you're like 'Next motherfucking question please!' I mean, come on man. I get that one a lot and, Jesus, it really does make me wonder what the hell people are reading this for."

So he probably doesn't want to do the old describe-yourself-in-one-sentence end-of-interview game then? He grins. "Sure, why not? Let's see … I'd rather give someone a smile than a punch in the face. That's me. Will that do?"

From the world's most complex A-list action star? Yeah – it's good to know.