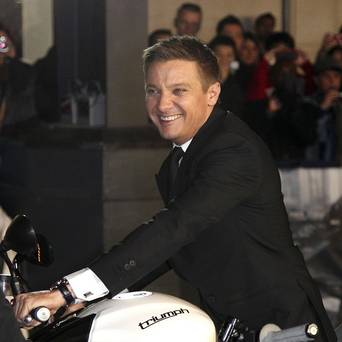 Jeremy Renner has insisted that he "has no idea" about an upcoming role in Mission: Impossible 5.

There are rumours that the 41-year-old, who previously appeared in Mission: Impossible - Ghost Protocol, could be taking over the lead role from Tom Cruise, but he dismissed the stories, saying: "That's news to me sister! I don't know anything about that."

Since his Oscar nominations for performances in Kathryn Bigelow's war movie The Hurt Locker and Ben Affleck's The Town, Jeremy - who plays new secret agent Aaron Cross in The Bourne Legacy - has starred in huge action films like Mission: Impossible and Avengers Assemble.

"It's nice to be able to work and it's even nicer when people see your work. When it turns out well and does well at the box office, it's even better. It's a wonderful feeling," said the actor, who previously worked in theatre and TV.

He is relieved that immense fame came knocking in his late thirties rather than his teens.

"I've been working for 20-odd years in this industry and you just have a different skill set, I suppose," he said. "You have a greater sense of self, so I'm glad that any recognition's happened a little bit later on in my life."

And while he'd "love" to do another Bourne movie, Jeremy has got plenty to keep him busy in the meantime - including renovating houses.

"It's been a part of my life for a long time and I don't plan on giving it up. These are homes and lifestyles that I help provide for people," he explained.