Man of the moment, Jeremy Renner, rode his bike to The Bourne Legacy Sydney premiere and also found time for an interview. 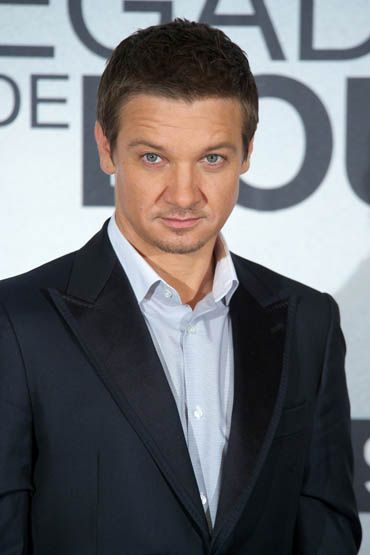 Two-time Oscar nominee Jeremy Renner (The Hurt Locker, The Town) was not the interview one would imagine.

Sitting halfway along a boardroom table, he was enjoying a pasta and mushroom takeaway meal, and with his head down, looking very tired.

However, as the interview progressed, the more interesting he became. As he apologised for eating, I sat next to him and remarked on how intense his past few years had been. He agreed and continued to eat as I asked my first question,

James (his character from The Hurt Locker) was a man of few words; do you liken him to Aaron (his role in The Bourne Legacy)?

“Not really, he’s different. They are different movies, but in saying that, it’s kind of who I am really, so inadvertently my perception of the characters are the same as me, at least filtered through my limited vision of a man of few words. I like to express feelings through actions, I think that speaks volumes.”

When first approached to be part of the new Bourne, was it an easy decision to say yes?

“Creatively yes. I wasn’t so sure how they were going to do it, and it concerned me being a fan of the franchise, but I really wanted to be a part of that but I didn’t get how they would pull the storyline off. But then they sent me the script and I went ‘WHAOOHH, WOW this is a really exciting idea!’ So I couldn’t wait to get involved!”

Jeremy laughs and raises his eyebrows at what I’m suggesting.

“Well it always requires time to develop skills and to make it look like what the hell you’re doing… especially in this movie where the action is built on authenticity, no camera tricks or CGI, to make it look like you can fight. That was the fun part, training diligently alongside the stunt guys. I loved that. Challenging myself.”

Was that you jumping across and running along the top of those buildings?

Did the movie insurance people go nuts when you did that?

He laughs loudly while nodding.

“I just focus on my job and they can be worry-warts and focus on their job. I don’t care.”

The chemistry with Rachel Weisz is up there to see. Was she also up to the physical challenge?

“Yes. She was the best. She has a really strong physical presence and a strong body of work; she’s a giving actress that made my job really easy.

Had you ridden a motorbike before?

How complicated were the busy streets of Manilla?

“Well that’s a whole other thing; the streetlights were mere suggestions, the lines on the road were kind of decorations, but it was fun, except I was responsible for the actress on the back. That was nerve-wracking but other than that, it was fine.

I’m a big fan of S.W.A.T. What can you tell me about making that film?

“It was a fun gig, many great experiences during production and that’s where I became friends with Col (Colin Farrell) – A good guy.”

Will Hawkeye appear in any of the upcoming Marvel sequels?

“I don’t know, I haven’t heard anything about it. I suppose they will call and say ‘Hey Man, something is coming up, are we good?’.”

Being the envy of myself and many other guys I assume, how is working with Scarlett (Johansson)? Is it both great on and off the set? She comes across to me as a guy’s girl?

“She’s awesome, she’s as good as it gets. She’s obviously a beautiful woman. Her sense of humour is great. I like her no-nonsense attitude, but being a delicate flower as a woman, she still has a brassy, ballsy attitude, which is really refreshing.”

How did it feel to be nominated for an Oscar? How was the whole experience including the build-up and the night?

“Man that was amazing. It was a personal story [The Hurt Locker] when we were making it and became very close. To see it being received so well was great; having your work noticed is one thing, but having it noticed by your peers is an honour. It doesn’t really get any better.”

I hope you work with Kathryn (Bigelow) again. Did you find her any different to say, male directors you’ve worked with in the past?

“More masculine but look at her movies, she makes very masculine movies. She has a hands-on approach which I kind of dig. I do not like being directed necessarily. I do not tell them what to do; I just want to do my job. All the storyline stuff was spoken about over a cup of coffee. She is wonderful, she’s a painter, and she uses the camera as her canvas.”

In The Town you played a really nasty guy, a testament to your acting. On the flipside, would you ever consider, or have you ever been offered a romantic comedy?

“No. But here and there, I suppose I’ve been offered lighter things. I could never say never, but most likely, it’s not going to happen. Not in my outlook.”

Are there any filmmakers/directors you would like to work with?

Off the top of your head, name one.

“Paul Thomas Anderson. I like PTA, he’s a god, I am a big fan. I wanted to do The Master with him but found out I couldn’t do it. I want to work with Ben (Affleck) again and Kathryn again. There is so much to learn, the amount of directors out there I would love to learn from, it would be fantastic.”

“It should be a good ride. It’s a sort of fantasy, action film with a sense of humour. It doesn’t take itself too seriously. It’s set 15 years later, after the end of the fairytale, the pair were left for dead, the witch tried to eat them but they killed her. They become bounty hunters and kill witches. It’s a fun fantasy world. I love (co-star) Gemma (Arterton) and their brother/sister relationship.”

Do you get to use the bow & arrow again?

“She has the crossbow. I have a shotgun. (Laughs) Good fun!”