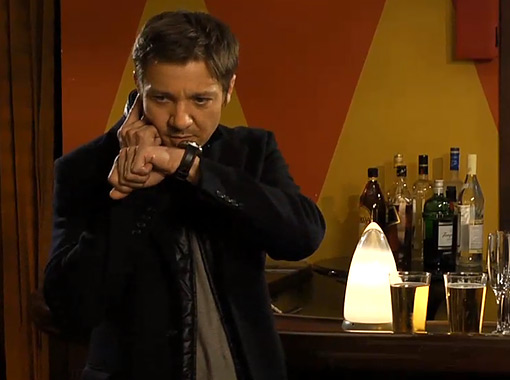 Jeremy Renner won't say whether any of his famous costars will assemble in New York for cameos when he hosts Saturday Night Live for the first time this weekend, but he will say that one has long encouraged him to do the show. "I remember Jon Hamm [who starred opposite Renner in The Town] mentioned it to me after he did it. He said it’s something that I might really, really like doing, and that was some years ago,” Renner told EW on Thursday, after shooting a round of promos with musical guest Maroon 5 and Fred Armisen.

“I finally had the moment where they wanted me [and my schedule worked], and I was really, really happy about it, I suppose. It’s terrifying, I guess,” he admits, with a laugh. “It’s a great honor. It’s just one of those things where for me, as an actor, I feel like I’ve hit really interesting milestones in life, from just working and doing a movie that people see, to then getting nominated for an Academy Award. And then you do the cover of a magazine, and that’s always kind of an interesting, weird thing. And then you host SNL, and it’s a whole ‘nother interesting plateau. It’s a beautiful thing. I’m glad to be a part of it.”

ENTERTAINMENT WEEKLY: As you’ve mentioned, you have friends who’ve hosted before. Who did you ask for advice, and what was the best tip you’ve received?

JEREMY RENNER: I talked to Jon Hamm about it. He didn’t really go into too much advice. He was just saying, like, “Dude, you gotta do it. Just go have fun and be a jackass. You’ll be great.” I’m like, “Okay, that sounds great.” And then I worked with Adam McKay [a producer on Renner's next film, Hansel & Gretel: Witch Hunters, due Jan. 25], who was a writer during the Will Ferrell years. We talked, and he gave me a little bit more advice. And then when I got here, everybody’s been so generous with their time, and thoughts, and feelings, just saying like, “Don’t worry about it. This is what’s gonna happen…” The whole cast has been really wonderful.

You’ve said you’re a huge fan of the show, but you didn’t come in with any requests or specific ideas in mind.

I think in hindsight, after this is all said and done, I probably would have come in with more specific things, but I don’t know what those are. That’s just not where my head’s been sitting, in sketch world. Maybe if you give me four drinks, I’d have those characters, whatever those little bits are. But it’s not my job. It’s not what I think about. If this were to ever happen again, I’d probably think about those things — like, oh wait, this might be something fun to do. Let’s explore this sort of character. But I’m just wide open to it. See what happens. Let the pros do what they do, and I’ll just follow their lead. During some of the read-throughs Wednesday, I was reading [sketches] for the first time, and I had to stop, like, what are you guys smoking? It’s tremendous. [Laughs] Where do they come up with this stuff? They’re geniuses.

I know you won’t tease any sketches, but is there anything you’ve discovered you’ve taken well to this week comedy-wise? It’s not a side of you most people have seen before.

I have no idea what I do well. With anything in life. [Laughs] I’m a pretty good sleeper.

So you’ll consider this experience a success if…

If I don’t die. If I come out of it feeling that I was able to help them have a good show. If I felt like I did my part. I feel like we’re all a team here on this thing, you know. You want to feel good at the end of it. I mean, I expect to screw up. I expect other people to screw up. I’m not worried about that. I’m kind of excited for that. But to get through the chaos of it all, and still come out like, we did it, we got through it, we got to the end and the finish line.