Catching up with Hansel (Jeremy Renner) and Gretel (Gemma Arterton) 15 years after the traumatic incident involving a gingerbread house, the siblings have evolved into vengeful bounty hunters dedicated to exterminating witches. Over the years, the siblings became expert hunters, famous for their proficiency at tracking and taking down their prey. Although still recovering from their ordeal, their work is relatively easy as for an unknown reason harmful spells and curses do not work well against them. The Mayor of Augsburg recruits them to rid the town and nearby forests of an evil sorceress (Famke Janssen) who is planning to sacrifice many local children at the witches’ gathering during the upcoming ‘Blood Moon’ night in two days time. To make things worse, the duo also has to deal with the brutal Sheriff Berringer (Peter Stormare) who has taken power in Augsburg and conducts a very indiscriminate witch-hunt of his own. Directed by Tommy Wirkola (Dead Snow), ‘Hansel & Gretel: Witch Hunters’ is pencilled in for a January 25th release in the US and a March 15th release in the UK.

15 years after Hansel and Gretal hatched their escape from a child-snatching witch, they’ve become these fierce, formidably skilled bounty hunters dedicated to tracking and terminating witches….

The brother-sister dynamic between Hansel and Gretal always stays at the heart of the action. Was that something that appealed to you about this film?

Jeremy Renner: Definitely, there was a lot to explore there. What was interesting for me was that there was a lot of room for character, and a lot of room for developing an amazing bond and relationship and behavior in a really fantastic world. When I read the script, my first thought was, “I can’t believe this hasn’t been done yet.” It’s such a great idea with so much potential. That dynamic was definitely a big thing, I loved that what Tommy wrote left so much room for character.

Also, I was told that there was a one-sheet that grabbed your attention, even before you read the script….?

Jeremy Renner: Yeah. The initial attraction came from a little one-sheet I got, before I even got the script. It was something that ended up being in the movie, it’s of Hansel and Gretal walking away and a witch burning in the background, fire going up in the air. Hansel had a shotgun and Gretal has a crossbow, and they’re just walking away on this poster. I found it incredibly interesting, I don’t know why (laughs), but it was. And then actually shooting the film, it was how I imagined it would be – and even more so sometimes. 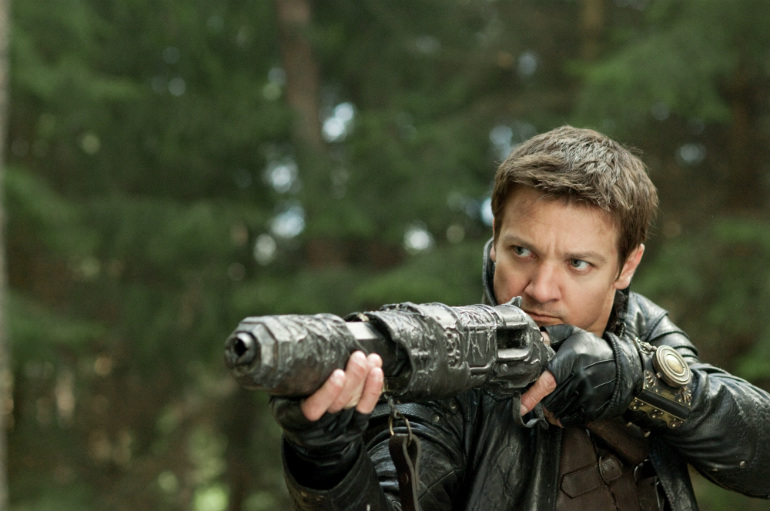 How was it building that sibling rapport with Gemma Arterton?

Jeremy Renner: Gemma is a real gem, that’s for sure! We were lucky to find her, we read a lot of really great actresses, it took along time. But the real trick in finding the right girl for this was… well, we kind of look a bit alike, but there’s also a weight she brings to things without actually having to do much – I don’t know what that is, I couldn’t tell you, but she has it (laughs). And between us, there was something already right there, it was natural. We couldn’t have been more lucky to find Gemma, she brings a wonderful depth to Gretel. She’s great.

There’s some intensive action in the film, with each battle against such magically empowered enemies being hard-fought. How did you find doing the action on this film? Also, there’s a mix of serious and comedy, so I can imagine that adds another element?

Jeremy Renner: There’s a lot of really arduous action in the film. One of the big difference in this movie is that while usually heroes win all their battles, Hansel and Gretel get their butts kicked numerous times (laughs). So in a way we had to face getting beat up every day. But we also had a great time. Tommy brought an incredible tone to the whole thing, like you said, a mix of serious and funny that I think gives the film the quality of a real adventure. And with Tommy, I always knew that if I could make him smile from ear to ear, it was like, “Ok, that was a good take or a good scene or a good suggestion.” He’s soft spoken and he’s quiet, but with that he can command the set, and he knows what he wants. He wrote the story and he knew what it should be.

I know a lot of the world was practical on these massive sets, and the witches would be wearing prosthetics – there was little green screen. How did you find that whole element of filming on ‘Hansel & Gretel: Witch Hunters’?

Jeremy Renner: Most of it is all practical, even the witches flying on the brooms – it was pretty much all practical. They were all on wires, it was awesome! There’s a scene were I come down from the top of a mountain with Pihla and I leave her with her machine gun, then I come down around and literally there’s 60 witches there. The rock structure was maybe 70 or 50 feet tall, it was massive, and I’d be shooting these witches and they’d just be flying off on wires. It was like if you switch on a light and cockroaches would scatter, it was the funniest thing. There’s nothing else like it, I’d have a good giggle about it (laughs).

I can imagine those sets were fun?

Jeremy Renner: Definitely. Having the environment and the world feel like it was, I didn’t have to do much green screen for the most part, so I got to use the surrounds as I would if I was there. I didn’t want to leave that world to be honest with you. I was walking around Augsburg in this cool-ass leather coat, I’d be getting off a horse, with a shotgun on my shoulder. I could just grab some fresh apples, I thought, “I would like to live like this, this is kinda cool,” (laughs). There was this old tavern where you’d scoop beer out of this trough. I dunno, there was something very primal that was really fun to me. I loved that (laughs). 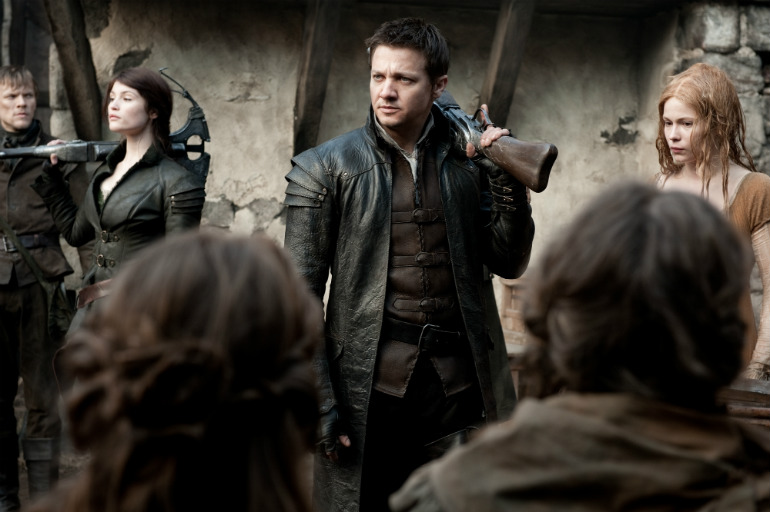