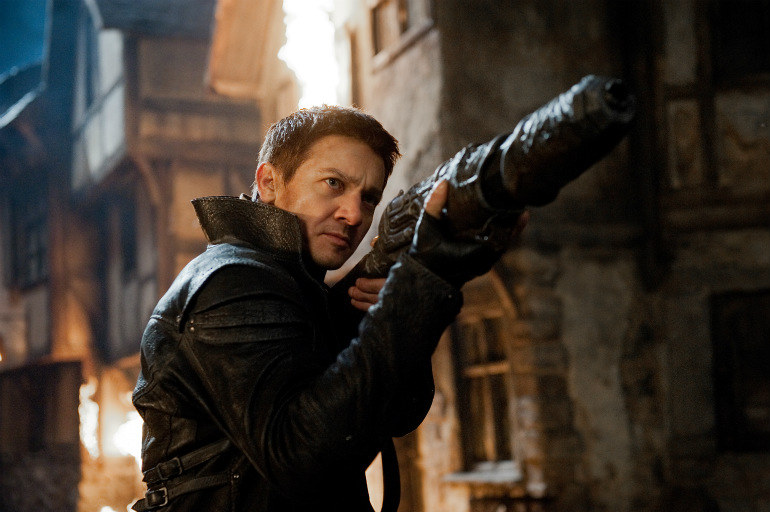 Two-time Oscar nominee Jeremy Renner is in multiple major movie franchises and has several projects coming out in 2013, including "Hansel & Gretel: Witch Hunters." Still, he manages to write music "here and there" and occasionally indulges in his sideline, renovating houses through a company he owns with a friend. "We're working on one this year," he says with a smile during an interview at the Four Seasons Hotel.

How is all this possible? One word: "Fluidity."

Asked what he has learned from directors he has recently worked with, being an aspiring director himself, Renner says that the actor-director relationship must feel like a collaboration. And he warns against overpreparation - "if there is such a thing" - because so much can go wrong. It's more important, he believes, to "be fluid."

" 'Fluid' is a great word for creativity. In acting and in life. To have fluidity on set. Being prepared as you can be, but willing to let it all go because it's not working. To be fluid and to allow change, move around the obstacles. 'We can't get that shot, we have to get something else in.' It's something I think a lot of great directors have, to find the answer as quickly as possible."

Renner poured himself into "Hansel & Gretel" as something "lighter, a nice escape from what I've been doing, the intense characters" (see "The Town" and "The Bourne Legacy"). And lighter it is, if bloodier by the bucket. The candy-loving siblings of fairy-tale lore survive their childhood trauma in the witch's house to bring the pain to various magical creatures as gun-toting adults. Just the ones who deserve it, though; no unicorns or wood fairies getting blown away or anything like that. There is a fair amount of dismemberment and head-squishing, though.

"I really thought it was a creative take, a fairly original story, if there are any original stories to be told," Renner says. "I just grab onto that relationship - everything else sort of doesn't mean anything. I grab onto the plight of Gretel and myself. I don't think they exist well without each other.

"It was really important to find the right gal to connect with," he says of co-star Gemma Arterton ("Quantum of Solace," "The Disappearance of Alice Creed"). "And she fit the bill perfectly.

"She's game. That girl is game. It was foreign to her to be in action stuff; it was a great thing for her to learn and grow. We got along straight away. She's smart as they come. And obviously she's gorgeous. Very fluid."

There's that word again, but if Renner were a pro athlete, his nickname would be "Franchise" instead.

The 42-year-old who made his name in the indie "Dahmer" (yes, that Dahmer - chew on that) and earned Oscar nods for "The Hurt Locker" and "The Town" is now in three big-time movie series. Sorry, fans, Renner offers no updates on the next installments of "The Avengers," "Mission: Impossible" or "Bourne":

"I'm really out of the loop on that stuff," he says. "I guess 'Mission' would happen before anything else, then 'Avengers.' ... I have no idea."

Then there are the intriguing, decidedly non-tent-pole projects he has coming up - including James Gray's recently completed "Lowlife," with Marion Cotillard and Joaquin Phoenix; "Imagine," with Al Pacino and Julianne Moore; and a David O. Russell film based on Abscam, the FBI sting operation of the late '70s and early '80s.

Doesn't have to worry

The franchises are "a blessing because I don't ever have to worry about doing a big movie," he says. "I only have to focus on (his production company, the Combine) and anything I really go out and look for."

The action-movie veteran has battled zombie hordes, aliens and Tom Cruise, but the kid in him can still come out when, say, witches go zipping around him.

"The stone circle, there was a lot going on in that scene," he says of "Hansel's" big set-piece battle. "Mind you, they were really flying. It was all practical. They were on wires. So I come running down and pyew pyew!" He dodges "witches" firing into the sky around him. "They're taking off on these wiring rigs, flying around. We were in this massive studio. They built this giant, three-story, rock structure. It was so fun."

Most actors may feel obligated to describe their work as "fun" - complaining might not get much sympathy from 99 percent of working folk - but Renner seems to genuinely appreciate his time on set.

"I hated leaving. I wish I could live at that time. It's like a Western. Things are the way they are. You've got what's on your back, your horse, the mud ... the simplicity of that life," he says. "We were living in these sets they built. These worlds. There were trolls and witches, people with chickens and goats, roasting pigs. It was like Disneyland for adults."

Hansel's wide ride includes taking a hellacious pounding: being dropped into stone pits, thrown against walls, bounced off trees and the like.

"I certainly got beat up a lot, and they cut a lot of that out, even, in fear of - 'We want him to be formidable,' " he says, laughing. "Somehow, someway, we got the witch in the end, but I was getting beat up the whole time. Which I kind of liked, but they wanted a little more balance."

Rather than being concerned with comparing the fairy-tale gore fest with, say, "The Hurt Locker" or "The Avengers," Renner is content to go with the flow.

"I've been pleased when people see it, their reaction coming out," he says. "That was what we were hoping for. That's the most important thing. Just go ahead and have some fun. It's nice to see people walk away with a smile. They're pretty pumped about it."