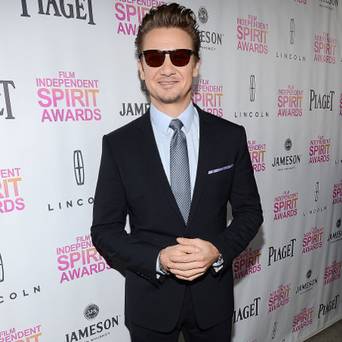 Jeremy Renner has joked award ceremonies are like a “high school reunion”.

The season is in full swing, with the Oscars coming up at the end of next month.

With all the top Hollywood stars in attendance, the Avengers Assemble star has likened the glitzy events to meeting up with childhood pals.

“What’s really great about them is they’re kind of like a high school reunion,” he laughed to Australian radio show hosts Kyle and Jackie O.

Over the years Jeremy has starred in films such as The Hurt Locker, The Bourne Legacy and Thor, meaning he has dressed up in a variety of interesting costumes.

His latest film Hansel & Gretel: Witch Hunters sees him donning a tight leather jacket with gloves and trousers to match.

“This costume was actually very comfortable. I slept in that leather get-up!” he joked.

“They did a really good job at making it look so cool but it was still functional. I think the beard in Bourne was really [the most] uncomfortable. It was like having an old hairbrush glued to your face, or some dead road-kill. It’s really quite awful. I think that was the most unpleasant; the rest was quite bearable.”