FilmInk snatched time with the director and stars of 'Hansel & Gretel: Witch Hunters' at the film's Sydney premiere. 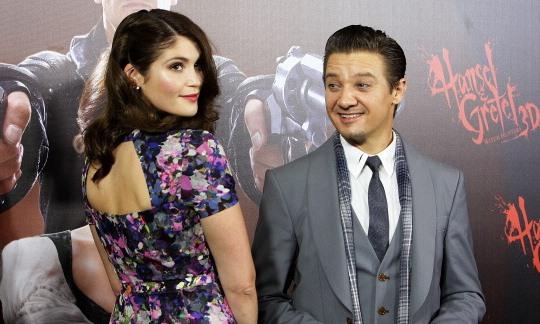 Sydneysiders came out in droves to see the stars at the Australian premiere for Hansel & Gretel: Witch Hunters, a radical revisiting of the classic fairytale. Fitting with the macabre theme of the film, the red carpet was actually white with blood splattered stains. FilmInk waited our turn to speak to the director and stars beside a temporary stick forest, while a snow machine blasted us with fake flakes.

How did you get in and out of those remarkable costumes?

With a lot of help [laughing]! It took a while to get into them, it was a good thirty minutes every morning to get it all on and they were pretty tight, those pants. Some days they were tighter than other days especially after a weekend!

How did you cope with the stunts?

One of the best things was getting down and dirty, covered in mud.

The Disappearance of Alice Creed and Tamara Drewe really showed your dramatic ability and poise. Do you prefer those kinds of roles?

Yes, I do lots of theatre as well so that’s where I think my creativity is set free. You have a bit more flexibility on smaller dramatic roles, and aren’t under such big pressure like the blockbusters. This is my year of independent filmmaking, I have four smaller movies coming out.

This role is not something you would normally do. What drew you to the character?

It was a big departure from anything I have done before and I just thought it would be a lot of fun and certainly it was [laughing]. Audiences seem to like it too, and that’s the most important thing?

What were the most challenging and easiest parts of filming?

The hardest thing about it was going home. I was having such a good time, while the easiest was getting up and going to work every morning.

What can you tell me about your upcoming collaboration with director David O. Russell? Is it confirmed?

Yes, it’s confirmed. We start up in about a month or so, very excited about it. I get to work with David, Bradley Cooper, Amy Adams and Christian Bale. It’s a tremendous cast, I have a lot to learn from those people.

Did you work with director Tommy Wirkola from the concept, bringing this film from the ground up to the big screen?

I saw Tommy’s movie Dead Snow at Sundance Film Festival a few years back, fantastic film. I had just started working for the Adam McKay/Will Ferrell production company. So we brought Tommy in and we were his first official Hollywood meeting, that’s where he pitched us the story. He had all the basics of it of what he wanted to do, we loved it, so we took it to Paramount right away.

Looking back at your earlier movies, did they prepare you for this?

Well of course, but nothing can prepare you for trolls, witches and fighting in the forests of Berlin so it became a big learning curve for everybody, but a fun one.

It’s such a departure for Jeremy Renner. Was it hard to get him on board?

We were lucky. He had just done The Hurt Locker at the time we approached him. We sent him the script and some early artwork. It really struck a chord with him. It was probably two-and-a-half years ago, before he had booked Mission: Impossible 4 and The Avengers. We were thrilled, I thought we had really lucked out and we did, he’s the man.

Congratulations on Hansel & Gretel being the number one movie in many countries around the globe right now. I believe this was your baby from concept and you always wanted it to be your foray into Hollywood.

I was always fascinated by the fairytale. People forget how dark and twisted those stories really are. I was scared to death when I heard them as a kid. I always wondered what happened to them after the end of the story. The actual fairytale reads like a first act of a film. You leave those characters in an interesting place so for me it was just taking that, then adding humour and action.

Jeremy was fantastic in the film, his brotherly chemistry with Gemma was also extremely believable. Was Gemma always the first choice?

We got Jeremy first, he was on board really early and it was always about finding the right combination. She came in late in the process, actually after I saw The Disappearance of Alice Creed. I loved her performance in it, she was so strong but at the same time had that vulnerability about her. I went to London, I read with her and she was amazing. But of course when you’re casting a brother and sister, you have to make sure they gel. But we got them in a room, they loved each other and we knew we had out leads.

Any ideas for a sequel?

We haven’t really thought about it that much to be honest. I am from Norway, we don’t take things for granted, but it certainly would be a fun place to go back to if people were interested.