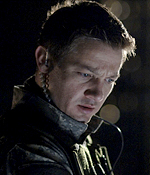 It's not just us, then: Jeremy Renner, star of 28 Weeks Later, is terrified of his new movie too. The sequel to Danny Boyle’s 28 Days Later takes place after all the initial "infected" humans (read: blood-puking zombies) have supposedly died out, and a U.S.-led NATO force is reintroducing citizens to a freshly secured Britain. The military, of course, is wrong about the infection, and when all hell breaks loose, it’s Renner as Doyle, a super-marine, who attempts to save the day. This isn’t Renner’s first ride round the horror rodeo: He’s guest-starred on Angel, played serial cannibal Jeffrey Dahmer and has even written a script about werewolves. Singing werewolves. In Seattle. Scary? Maybe not so much. But we caught him on tape talking about some truly frightening things. Take a look after the jump.

Even Movie Stars Get the Chills
Dahmer was much different because of how eerie it was. This was weird, since I knew 28 Weeks so well but was still surprised by how it terrified me. It hurt me, man. It’s a great adrenaline ride. I left it feeling like I did after seeing the first one. It’s an apocalyptic thriller. It’s great, man. I’ve seen it twice. I’m going to see it one more time tonight — maybe it’ll get easier to watch. I hope not. I love the thrill, man!

Zombies Are Metaphors; Meteors Are Not
Epidemics have terrified me for a long time, like genocide from some sort of viral disease. Think about a rabies type of thing, or, like in the ’80s, when we had AIDS. Say you were to have sex with someone who had a killer disease and then you were to die 30 seconds later. That’s a little far off . . . but it’s not that far off. Let’s talk about SARS. Let’s talk about the bird flu. Let’s talk about these epidemics. Let’s talk about the plague. Those are more passive types of diseases, but take a look at rabies. Things like that just terrify me. If there’s going to be any sort of Armageddon or apocalypse on this planet — aside from the sun exploding or being hit by a meteor — I definitely think the human race could be wiped out by something like this. That’s what so terrifying about 28 Weeks. It’s plausible.

Just When You Thought It Was Safe to Go to the Pub . . .
We shot 28 Weeks every Sunday. They had to set the scene and lock down the streets, but no one was around at 4 a.m. because people are passed out at that time anyway. But I remember walking down Shaftesbury Avenue, and they’d set the scene the night before, littering the street with broken cars. I was walking the street before we started shooting, checking it out, seeing how interesting it was . . . and all of a sudden I saw this bar that was full of people. They were all drunk and shouting and shoving their asses against the window! Funny, man. That’s what’s called a "lock-in" there. They lock themselves in a bar and drink until morning.

From the Infected to the Hirsute
I’ve been working on a script that’s become a trilogy about werewolves. It’s called Howl. Just like in 28 Weeks, there’s an element of plausibility to it — like what you’d actually do in that situation. Well, it’s not actually a werewolf movie. It’s about a guy who genetically splices human and wolf DNA to create the perfectly loyal human being. It’s about a rock band in Seattle. You know — sex, drugs, rock ’n’ roll and werewolves.