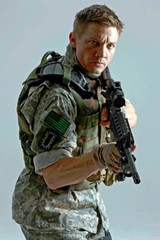 "Hurt Locker 2 I won't be in," Jeremy Renner tells a group of us near the end of our interview. That's not a knock at the movie, which is getting stellar reviews, or at Kathryn Bigelow, the movie's director whom Renner calls "tougher than anybody on set." But after Renner described working on days of 125-degree heat in the Jordan desert, and donning a 100-pound bomb deflection suit on top of it, none of us could blame him-- we wouldn't want to be in the sequel either.

The Hurt Locker, set in Iraq, follows an Explosive Ordnance Disposal team, a group of soldiers with very specific skills who are dispatched to disarm roadside bombs and other Improvised Explosive Devices (IEDs). Renner plays Staff Sergeant William James, a hot-shot and skilled bomb dismantler who initially butts heads with Sanborn (Anthony Mackie) and Eldridge (Brian Geraghty) when he joins their unit. The film evolves not only as a study of the kind of character you need to become to cope with a job this intense, but as a dramatic nail-biter-- every scene is literally life and death.

When we spoke to Renner during New York Comic Con, none of us had seen the movie, so unfortunately no one could get into specifics. But he still had lots to say about the experience of filming a movie so intense, the bonding that gets you through the day, and all the Canadian T-shirts he packed to bring to the Jordan set.

What's your super bad-ass military experience?
Yeah, zero. I avoided that whole plight. But I was fortunate enough to learn a lot for them. Yeah, it's exciting, it's thrilling, it's a heart-pounding experience. It's pretty intense, man. I was glad to be a part of it.

Who trained you?
EOD [Explosive Ordnance Disposal] team leaders at Fort Irwin were my main mentors during the project, actually. Yeah, I thought I was in pretty good shape, but jeez man, what these guys can do. My hat's off to these guys.

How long was the training?
Probably two weeks, there every day. Then off and on, just random things. A lot more than the physical, it's the mental aspect. What fuels somebody to do what they do makes them a very specific individual. Don't get me wrong, EOD is a very specific job. Not many people are bomb dismantlers. But what fuels them to do that makes them more specific, and that's what I was trying to figure out. It was a very complex character to play. I was trying to get a grasp on how volatile he was.

What did you get out of meeting the people who do this work?
First I was shocked, for lack of a better word, at how nerdy they are. They're all very, very smart. It's also technical. It's really interesting. These are not A-type personalities. They're completely selfless. Obviously their job is very selfless. It's the main thing that I kind of got from it. Usually they'll become a civil servant of some point, when their time is up. Firefighter, a lot of them are teachers. Interesting.

Was there a camaraderie among you and the rest of the cast?
Yeah, we all bonded. Even if we hated each other, which we didn't, you have to bond if you're dealing with extreme circumstances. Not even what we're shooting, but how we're shooting it. The 125 degree heat. Everyone's passing out, everyone's sick. There was trauma happening. Someone's face blew up from the fireworks that we had. Trauma and drama was happening off-camera every day, so we had to cling together, especially Anthony, Brian and I.

What's the experience like working with Kathryn Bigelow?
She's a painter, is really what she is. She's such a visual human being. If you look at any of her films, they are very very visual. That allowed us to film the emotion behind it. She just sat back and kind of painted. She sat her cameras where she needed to do it, let us do our job and she did hers. She knows more information really than she needs to know, or will ever really transcribe to film. But she tries to keep it as honest as possible. She wanted fresh, emerging faces. She really wanted to play it as real as possible.

That intensity that you're mentioning. It's very in your face, very strong stuff. Were you surprised by that working with a female director?
Gender had nothing to do with it. This girl was tougher than anybody on set. She's this supermodel looking woman. She's spright. How she dealt with that day in and day out, I have no idea, because I barely did. 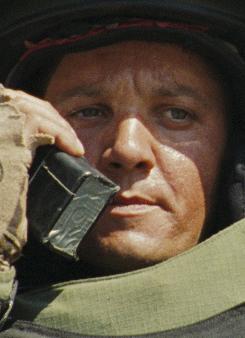 How was it shooting in Jordan?
I was scared before, I'll be honest with you. I was an ignorant American, not knowing very much about Muslim culture or the Middle East, for that matter. So I was going over as a Canadian. I had Canadian hats and T-shirts. I didn't know! "I can't be an American in the Middle East." And after being there, there people are so generous and welcoming. We learned that they're more Westernized than I ever thought. We're their biggest ally over there. Obviously the heat sucks. It's unbearable. The Red Sea, the Dead Sea, all within hours of each other. Amazing, amazing place.

Was there improv involved in some of the scenes?
A lot of that stuff we played around with. She sort of set up a situation, and I'd go figure it out. There were some specific things that she wanted. We just kept playing. Again, we had 200 hours of footage. We just kept shooting and shooting, coming up with different things. Being in the suit is seemingly torturous at first, but it ends up being pretty peaceful. Your whole body and spirit is being crushed by all this weight, but you don't hear very much. I'd play a lot of times Beethoven when I'm in the suit, so it's almost like this peaceful, poetic thing. You feel so safe, even though you're not. And personally, it's so dang hot that it doesn't get any worse than that. All these guys are roasting slowly out in the sun. When I take it off, I'm feeling good.

You seem to have a particular interest in playing military roles.
Yeah, there's something interesting about that. Different types of movies all the way around. One's very genre, 28 Weeks Later, and SWAT being a big blockbuster. This is the most intense, I think, out of all of them. Do I love guns? Eh, I think they're interesting. It's a playground for me. For me, as Jeremy, I never get to play with guns. I know how to use them very well now, because of my job. It's like being a boy again, getting to run around shooting guns. For me, it's fantasy.

What do you think the audience for this movie is?
It's pretty broad, to anybody who likes action, which I think is a lot of people. Could it be a big summer movie? Yeah, I think so. But it's very intelligent, and has a lot of great character driving elements in it that drive the story. I think all across the board, I think men and women will both enjoy it, because it has something to say about human drama. It's not just some check your brain at the door action movie.