This weekend, audiences will finally have a chance to see Kathryn Bigelow's The Hurt Locker after it's been playing the festival circuit for the past nine months. ComingSoon.net has been following this movie very closely since we first saw its debut at the Toronto Film Festival last year. You may have already read our interview with director Kathryn Bigelow and screenwriter Mark Boal here or checked out Heather Newgen's video interviews. Back before either of those, ComingSoon.net had a chance to talk to actor Jeremy Renner in February after he showed an extended clip from the movie at the New York Comic-Con.

Renner plays Staff Sergeant William James, the newest member of an Army Explosive Ordnance Disposal (EOD) squad stationed in Iraq, whose job is to find and either defuse or detonate bombs set by insurgents. Having hundreds of missions under his belt, James refuses to follow the same rules and policies as his new teammates Sanborn (Anthony Mackie) and Eldridge (Brian Geraghty), which causes friction within the group, but with just over a month left on their tour of duty, all they have to do is survive if they want to go home.

It may be the role of Renner's career, a rich three-dimensional soldier character similar to the ones we've only seen in the absolute best of war movies like Apocalypse Now, Full Metal Jacket or The Thin Red Line, and very few people who see The Hurt Locker will ever underestimate the actor again.

ComingSoon.net: This is sort of a strange movie to have at Comic-Con, but I guess they thought it was the type of action movie that might play well with this crowd.

Jeremy Renner: Yeah, sure, and Kathryn having that experience from "Near Dark" and that sort of thing. I was surprised as well that this sort of movie is at Comic-Con but apparently, they're sort of embracing the film as a suspenseful action-drama-thriller.

CS: Kathryn's been away for a while and when this movie played at Toronto, everyone got really excited, because we hadn't seen her do anything like this in some time. How were you approached to play the part?

Renner: I received the script while I was shooting "28 Weeks Later" actually, and I was floored by the role instantly and the job of E.O.D (Explosive Ordnance Disposal), and then Kathryn made it so interesting to me as well. From there on out, it took us a year before we started shooting, and Kathryn was a champion, trying to get it made with emerging actors. She wanted to do it her way. I think she was a little burned by the studio system, so she wanted to make this her own way with her own specific vision. It turned out great because of it, no one got in her way. You've seen it. It looks like a massive budget, but shot for virtually nothing. For what she had, she did an amazing thing, I think.

CS: What did she tell you about your character or did you generally get all of it from the script?

Renner: I think I was so connected to the thing that I asked her maybe more questions than she asked about what the character was. She certainly had ideas, and I had a whole three-page list of questions and ideas and answers at the same time. We just kind of hashed it out. "What makes the guy tick? What fuels him? What makes him different from these characters?" Sort of very specific to James' journey, and we just hashed it out and came across what made sense.

CS: You've played a military man before, so did you get a chance to meet with any of the guys who actually did this sort of thing in the field?

Renner: Yeah, yeah. I've done a lot of things from "SWAT" to "28 Days Later," things with a lot of guns and military training, SWAT training, police training. This is just so different from that, it's an E.O.D., and I did the training for that as well, so it's a different mentality that these guys have. The character I play, that's a very rare sort of caricature of what E.O.D. is, it's actually not. The other guys are in the movie, a little more straightforward and rule-based. James is a cowboy, and he's reckless. The E.O.D. guys were telling me that this guy did exist but this is not common, so I had to sort of find ways to ask questions about what the rules are about E.O.D. so I knew how to break them essentially, 'cause James is a rebel in that sense.

CS: Did you find out what drives them to do this job? It has to be the most dangerous job for a soldier to have, because

they're literally playing with explosives and bombs that could go off any second.

Renner: Absolutely. Yeah, it's interesting more what they do after, if they survive, which most of them do, but they become civil servants and teachers or they stay in E.O.D. or working in the fields on military bases. They love their job. It's very technical and not so A-type male running out there and shooting and killing. It's very much like chess, very smart, smart guys.

CS: Since there is police work that deals with bomb situations, is that a possible direction once one gets out of E.O.D?

Renner: I don't know. Maybe more like a firefighter. I don't know if it's a gun sort of thing. I think they'd rather serve people. What they do is so selfless and it's purely amazing to me, and my hat goes off to them and what they do every day and what they're still doing right now.

CS: I hope people check it out, because so many people have avoided the "Iraq movies" that have come out. Where did you shoot this and what was it like on the set because obviously bombs are taken very seriously in the Middle East.

Renner: We were shooting in Aman, Jordan, which is actually pretty tame and I feel fairly Westernized for a Muslim country. We were in there a lot and people were very welcoming, very generous, and Aman's actually very beautiful, but we weren't shooting in the nice parts. We had to make it look like it was Baghdad and we were actually 3 kilometers from the Iraqi war in some areas. It was hot, and it was not pleasant whatsoever to shoot there. Our sets were a square mile, so there was massive amount of things going on, cameras everywhere. We tried to rehearse but there's really nothing to rehearse. We just kind of went and did it. Sometimes, you never knew where the IED was, you'd just go. A lot of times we wouldn't do a whole lot of things. She'd just say, "Just go down and figure it out." Some were a little more intricate where we had to try to figure it out. Every day was very different, a different adventure.

CS: Was there any other research involved with it besides talking to the guys and doing training?

Renner: Most of it was talking to the E.O.D.s and really getting a sensibility of what they were, what their rules were, why they did what they did, and then doing the actual training with the bomb suit. It was a simple thing of taking a stack of paper clips, getting on your eyes--which is very awkward in a 70-pound suit--picking one up, walking ten feet and then setting it down. Just doing that is exhausting, let alone carrying a 75-pound 1-5-5 for 300 yards or the bot that dies, you have to drag that thing in 125 degree height. So you do all these random things, then you take off the suit and go to the chalkboard and do simple math, just simple division, like 7 into 25. You lose 25 IQ points instantly, just because of the strain of the suit.

CS: Did you have to learn how to use the 'bot and its controls?

Renner: Yeah, yeah, I played with the 'bot, I played with some C4 and what it all means. Blasting caps, the whole thing, it was really, really great, so interesting. Fascinating job.

CS: The movie premiered at Toronto and a lot of people have been wondering when it's going to come out, so is there a danger of waiting too long and losing momentum? Do you think it will still be relevant by the summer especially because the war may be over soon?

Renner: Right, right. I absolutely think it will be relevant. We're shooting a movie that's not really about this war, but the backdrop of the Iraq war, which is still happening. Regardless of whether it's happening or not, the movie is... and again, because you've seen it, maybe you can take it differently, but it's just a backdrop. I feel like it could be a lot of different things. I think it's three guys doing an interesting job. We could be three professional bull riders and it could be that, and that's the backdrop, know what I mean? It just happens to be an interesting job with something kind of prevalent happening now.

CS: Sure, this could just as easily be about a bomb squad in an American city. 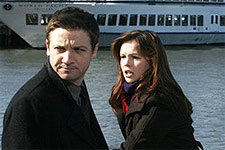 For the next part you have to remember this interview took place in February, before "The Unusuals" first aired on ABC... and before it was apparently cancelled. But it's a great show, so you should try to find episodes and petition ABC to bring it back!

CS: You have a new show starting up pretty soon.

Renner: Yeah, comes out April 8th, right after "Lost" on ABC. That's a great slow. It's called "The Unusuals" and it's about a precinct of New York detectives, it's a dramedy, so it doesn't take itself too seriously. Each show is sort of independent so people can watch and not feel like they're lost (for the lack of a better word).

CS: How many shows have you shot already?

Renner: We're on our sixth show now, we're doing ten, so we have a few more months here and then we'll be done with it. We'll actually be done before it airs.

CS: I'd be curious what the interest was to do that, because you tend to find pretty good movies to be in.

Renner: Because of "The Hurt Locker." It was sort of the final straw of having to travel to other parts of the world to work. I wanted to settle down a bit and kind of stay put. Got tired of living out of the suitcase, and the cast, it's an amazing cast.

CS: I saw that they got Harold Perrineau and Terry Kinney, who were both on "Oz"...

Renner: They're awesome... Adam Goldberg, Amber Tamblyn, they're all so great.

CS: Any other movies that you have coming up or just focusing on the show?

Renner: Yeah, there's a little movie called "Lightbulb" bouncing around to the festivals. I haven't seen it yet, so I don't know. I'm not quite sure about that, and then off to do something here on the break and not quite sure. It might be a graphic novel of "The Losers" it might be something else. Looking into something, coming up in April.