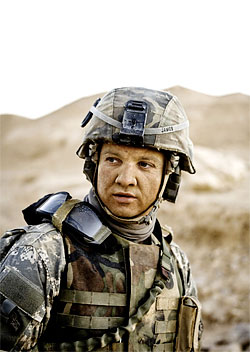 Jeremy Renner has played some wild, dangerous characters, from a man-eating serial killer (Dahmer) to a skinhead who falls for a black woman because he believes she's Hitler reincarnated (Neo Ned). He's turned in sharp lead performances in indies like Twelve and Holding and Take, and strong supporting ones in 28 Weeks Later, The Assassination of Jesse James, and North Country — but he hasn’t quite broken out. This week he could have his best shot so far with The Hurt Locker, Katherine Bigelow's Iraq-war drama, in which he plays the renegade leader of bomb squad. Vulture spoke with Renner about Iraq movies, working with Bigelow, and his role on ABC's now-canceled The Unusuals.

Nearly every Iraq movie has tanked. When you saw the script for Hurt Locker, why did you think this would work?
I was nervous initially when I first knew it was an Iraq-war film, but then I realized it’s really just about three guys doing a really interesting job. None of us wanted it to have any sort of political platform.

It’s low on speechifying.
Yeah, other movies overtalk it. I like to let the audience come up with their own ideas.

What does the title mean to you?
It took on different meanings as we were working on it. At first it was a casket. Then it became the physical place of an outhouse, because we had one outhouse to 250 people, and we were all getting sick from the food we were eating. So we’d say, "Look, I have to go to the hurt locker." And then it became this spiritual place of anguish. By the end of it, we were completely ripped of our dignity and self-respect and everything else. When I came home, I had such a hard time adjusting to the environment of L.A., with people wearing miniskirts, talking about how bad their coffee tastes. I was in a kind of spiritual hurt locker for three months.

In the film, you're essentially doing the same thing over and over — but it’s terrifying every time. How did you maintain the intensity?
It was 125 degrees, the bomb suit was 100 pounds. Just being in that heat alone makes you kind of tense and like, "Okay. This sucks." All we had to do was be as honest as we could. The rest was Katherine’s job. And she shot 200 hours of footage. This is more like an Apocalypse Now sort of thing: crazy amounts of footage.

What kind of direction did she give?
There were some days, I am sure, she wanted to claw my face off and I wanted to punch her — but she told me, "I hired you because you know how to do your job much better than anybody else. So you do it." And she said, "I'm gonna do my job and try to capture it." That was it.

You had headphones in the suit?
It was absolute hell. So I played "Moonlight Sonata," which was one of my favorite songs to listen to in this thing. It felt so peaceful amongst all the chaos happening around.

Is James an adrenaline junkie?
Initially, I was wondering: Is he seeking death? Is he a thrill junkie? But I think we’re all inspired for and motivated to do something that we are good at. These guys are not crazed, you know, adrenaline junkies at all. They’re very smart civil servants.

Did you relate to that sensibility?
It’s not nearly as dramatic, but, yeah, just me as an actor. I’ve sacrificed a lot of my life to do what I do. I’m single. I don’t have a family and I would like to. I’m 38 and I’m surfing on couches. These are all high-class problems, mind you, but I sacrifice these things to kind of have the life that I have now. I feel like I can understand that feeling that you’re brought on this earth to do this thing, or that you feel like if you don’t do it, no one else can do it.

When did you realize you wanted to act?
I was in junior college and I was a criminology and computer-science major. I took an elective acting class. At that time, it was an emotional playground for me to feel safe, be another character, and have all these feelings that I couldn’t express in the small town where I came from. It became therapeutic for me. Years of emotional repression … The stage sort of saved my life in a lot of ways. And then later it became about the art of it.

I’m sorry to hear The Unusuals has been canceled.
I’m a little bummed about, but I’m also happy at the same time, ’cause it allows me to go do some movies now. The character I played in The Unusuals is the kind of character I want to play in cinema. He’s an anti-hero, like James. I love those roles, ’cause there’s a lot to play with.