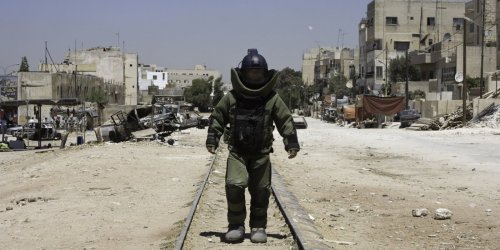 It’s lasted over six years. It’s become the buzz in the background of our daily lives. It’s the rote response to any “support our 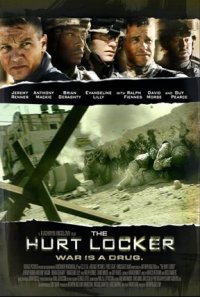 troops” suggestion. And even with a recent ‘withdrawal’, there still seems to be no end in sight. Two years ago, Hollywood tackled the Iraq War and came up losers. It wasn’t their intentions that were flawed, it was there approach. They wanted to make our soldiers into villains, transforming their acts of bravery into the raging outbursts of psychopaths - both abroad and at home. The resulting box office failure of such films as Redacted and In the Valley of Elah should not have been a surprise. After all, with the conflict still garnering national discussion, no one wants to think of the lasting, long range consequences yet. That’s why Kathryn Bigelow’s The Hurt Locker is so special. It’s not afraid to show the heroism along with the personal horror.

As members of the Army’s elite EOD (Explosive Ordnance Disposal) unit, Sergeant JT Sanborn and Specialist Owen Eldridge stare death in the face every day. Defusing bombs, landmines, and other booby traps in and around Baghdad brings them face to face with an enemy unseen and bent on their destruction. When Staff Sergeant William James arrives as a replacement for a fallen team member, he immediately sets his partners on edge. With his cavalier manner both in the barracks and out in the field, Sanborn and Eldridge fear for their lives. James is a certified adrenalin addict, a man responsible for defusing over 800 devices and yet always flaunting protocol and procedure in the process. As they move closer and closer to the end of their tour, the trio runs up against the biggest problem of all - how to deal with the horrific memories as a civilian back home.

Kathryn Bigelow has always been one of Hollywood’s greatest untapped directorial resources. After amazing films like Near Dark and Blue Steel, she was sunk in the backsplash of her marriage to/divorce from James Cameron, and the inevitable suspicion that most of her accomplishments clung neatly to his creative coattails. Underperforming efforts like K-19: The Widowmaker seemed to confirm the critic’s doubts. With The Hurt Locker, however, all bets are off. This is Master of Suspense filmmaker crafted by someone who understands the nature of nail-biting thrills. From the opening set-piece which offers an unexpected narrative twist to the moment when our main hero James discovers a series of interconnected bombs beneath his feet, Bigelow infuses her war-torn saga with the kind of white hot dread that so many modern ‘action’ films fail to provide.

Of course, the subject matter lends itself to such intensity. Based on journalist Mark Boal’s first hand experiences in Iraq (he also wrote the script), The Hurt Locker crackles with authenticity. The lingo is there. So are the props and procedures. And oddly enough, so is the attitude. These soldiers take their aggressive machismo into the countryside, forced to deal with situations that are terrifying in their randomness. One moment, you could be taking out a single shell imbedded in the ground. The next, an entire gang of insurgents appears, armed to the teeth and ready to riddle you with bullets. As a director, Bigelow understands how to manipulate the audience. Like Hitchcock, she finds the MacGuffin within the sequence, and then exploits it with a magician’s agility.

This is especially true of a brilliant moment when James, Sanborn and Eldridge come across a group of British operatives in the desert. Before they can get their bearings, they are under sniper attack, and with every precise hit, our heroes come closer and closer to the end. After setting up a massive gun and targeting the terrorist’s far off safe house, the trio waits…and waits…and waits. Because she has established that oft forgotten rule of successful fright filmmaking - anyone can die at any time - we worry about the fate of these men. We’ve come to care about them and their dedication to duty. Then Bigelow revs up the potential danger by throwing in the kind of whip smart direction that made her early reputation in Hollywood.

While the big names listed here seem to get all the pre-release glory, the real stars of The Hurt Locker are mostly unknown: Anthony Mackie (as Sanborn), Brian Geraghty (as Eldridge), and in an Oscar worthy turn, Jeremy Renner as danger junkie James. Bringing the necessary bravado to carry his character across the blurred lines between death wish and duty, we never once question the newcomer’s cowboy manner. Instead, we look at how present he is in the face of almost constant hostility and recognize that he’s one of the few soldiers who is meeting the war head on. He laughs at the tricks the terrorists use to foster the insurgency. He scoffs at the notion of doing things “by the book” or “halfway”. While he pretends to have a heart, he is quite taken with a young Iraqi boy who sells bootleg DVDs. And when Hell literally leaps up around him, he spits Satan in the eye and waits for a response.

Sure, it all sounds like testosterone and threats, explosions used as accents to the whole notion of America’s futility in the Middle East - and for the most part, Bigelow manages said stance quite well. Toward the end, when we see what life is like back home for these raw nerve recruits, how everything relates back to their time in the line of fire, we finally see the deeper, more indelible scars. Men like James, Sanborn, and Eldridge were never meant to be part of a peace time power shift in a steamy foreign location. They didn’t ask to play political arbiter. While never unprepared, they do seem unmotivated, having to manufacture purpose by playing their professional life so close to the edge.

This then is the modern military, a high trained group of able individuals who see the enemy as an all encompassing classification, something that can’t be easily deciphered or quickly negotiated away. In the face of such hatred, the only appropriate response is to literally ‘defuse’ the situation. Firefights are pointless. Both sides are armed and willing to die for their cause. But for the men capable of walking into a potential hurt locker and face the penalty head on, there is more natural nobility than any speech from a fancy flag waving politician. For once, someone got it right. Kathryn Bigelow’s main contribution to the story in Iraq is her desire to make it seem all ring true - and terrifying. The Hurt Locker is said reality check - and it’s excellent.