January 11, 2010 -- Jeremy Renner Expresses the Joy of Acting in "The Hurt Locker" (examiner.com)

Talk to people who have seen "The Hurt Locker" and loved the film, and they will probably say there are two big reasons why the 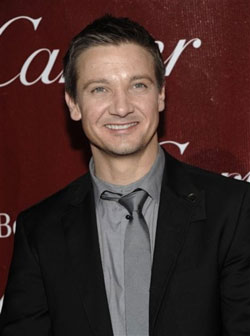 movie is excellent: director Kathryn Bigelow and actor Jeremy Renner. Both have gotten high praise for their standout work on "The Hurt Locker," which has racked up several awards and nominations since its June 2009 release in theaters. The movie is due out on DVD and Blu-ray on January 12.

Renner’s "Hurt Locker" character is William James, an American sergeant who is addicted to the adrenaline of his high-pressure work of detecting bombs during the war in Iraq. He loves his job so much that it becomes the central focus of his life, and people around him at times question his sanity. For his role in "The Hurt Locker," Renner has received two Screen Actors Guild nominations (for best lead male actor in a motion picture and best cast in a motion picture) and a Spirit Award nomination (for best lead actor). While filming "The Hurt Locker" on location in Jordan, Renner took some time out to do this interview.

How would you describe your character in ‘The Hurt Locker"?

James, I find him to be very interesting. It’s what drew me to the script. [There’s] a lot of similarities a lot of times when I do a character in a movie. This one just happens to be a little more me than others, like "Dahmer," where very little of me was in that guy. Even the philosophies I impose on James are all a big part of me. He’s a man of few words and a lot of action. I don’t know if he’s a maverick in a way. He just gets things done. He doesn’t really talk about it. I’m personally not a big talker. I get something done.

What attracted you to "The Hurt Locker" script?

What attracted me to the script of "The Hurt Locker," was first off, obviously, the character. I love anti-heroes. Nothing against Bruce Willis, he plays all these heroes —sometimes anti-heroes, actually — but I just like this idea of an anti-hero. And being the EOD (explosive ordnance disposal), and it's not really the Iraq War; it could be about bull riders, not just the EOD. It’s just a backdrop for three guys and how they approach life.

How would you describe filming "The Hurt Locker" on location in Jordan?

Working in Jordan has been an education, for sure. It’s been extremely difficult. Difficult in the sense that the conditions are very hard. It made my job easy as an actor, because I wasn’t acting. That sweat is real sweat. Those tears are real tears of pain. But I’m glad we’re not on some soundstage. I feel like a sliver, a fraction of an idea of what the EOD or what anybody in the military might go through every day and how unbelievable, how torturous it’s been. On the other side, even just as a tourist, it’s been educational to learn about an Arab culture, as a Westerner (especially as an American), you’re so unfamiliar with.

What do you want audiences to get out of watching "The Hurt Locker"?

My hopes, at least from my perspective as an actor, in this character is to present one man’s journey, as ["The Hurt Locker" co-star] Anthony Mackie will present another man’s journey. Anybody can grasp onto anybody’s path or it can be just a backdrop where people can walk away with any opinion they want about it. Do I think it’s an anti-war film? No, I don’t think it’s anti-war. Am I anti-war? Yeah, I’m anti-war. But am I anti-military? Hell no! There’s a lot of questions people may have. Will this make them more confused? Maybe. I hope so. We’ll make you think twice.