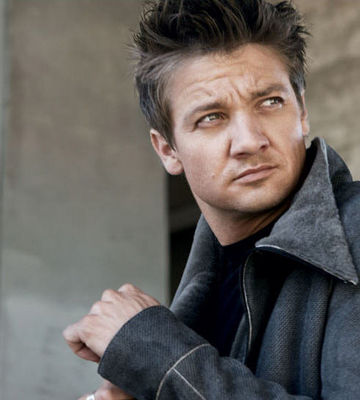 Jeremy Renner's everyman quality helps him play almost any character: rugged miner, sadistic killer, bomb-unit rogue. It's a kind of blessing, because generic Hollywood looks might have sentenced him to generic romantic comedies. Quirkier looks might have confined him to oddball roles.

As it happens, his skills and features have served him well in dark parts, including a turn in the upcoming crime thriller The Town. Renner plays a tough career criminal and best friend to gang leader Ben Affleck, who directed the film. Renner's character is a wild card with an edge.

"I like antiheroes," says Renner, 39. "It's hard for me to do something fluffy or light. It doesn't have to be heavy by any means, but my character has to be complex."

Finding that character is a different process each time. Sometimes it's as simple as putting a rock in his shoe to change his gait. For his breakout role in the Oscar-winning The Hurt Locker, he connected with Sgt. First Class William James when he donned a 34-kg bomb-disposal suit in 100-degree heat. "It was a massive discovery for me--and what a great gift for uncovering my character," says Renner, who was nominated for an Academy Award for the role.

In The Town, he found the mindset in hair and wardrobe: a close-cropped cut, sweatpants, and gold jewellery. "I would never, ever wear that stuff," he says, "but it made me feel, like, so outside of myself. I felt like such a thug."

Off the set, working on his side business building and remodelling homes, Renner the star isn't much different from Renner the guy who went to Modesto Junior College. He'll change his look with a nice coat or jacket. "I love a great jacket with boots and jeans—that's a uniform for me," he says.

Just as Renner puts his own stamp on a character, he likes to make what he wears unique. He's been known to combine unlikely elements, like a sharp three-piece suit and beat-up boots. "You can just throw on a nice suit, but that doesn't represent who someone is," he says. "I prefer to show some creativity and mix it up with whatever feels right."

He'll have a plain white shirt altered by a tailor. "It's like building a house, or anything, really," he says. "That's just how my mind is built. I think about the shingles on a roof or the piping on a couch or the leather on a jacket. That's also how I am as an actor. I pay attention to the details, and that reflects in everything I do." 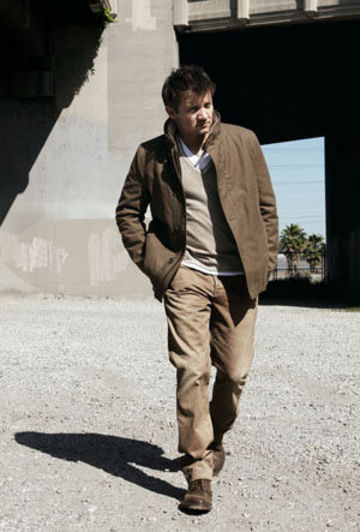 Renner loves to test his limits as an actor, but he's keenly aware when something doesn't feel right. A period piece? Probably not. Some clothes don't feel right, too, he says. Like those with flashy colours. "Generally, I don't like clothes to attract attention," Renner says. If the latest colour trends make you ill at ease, steer clear.

Make sure it fits

"It's all in the cut," says Renner—everything from suits to jeans. "How well clothes fit determines how good you look and how comfortable you feel." Have your off-the-rack suit tailored—the compliments and confidence you'll gain will make it worthwhile.

The actor prides himself on not being too fussy or neurotic about his work-or his clothes. Looking good is important, but not at the price of ease. "If you don't feel comfortable, why are you wearing it? Who cares what you look like if you're miserable?"

"I don't like clothes to attract attention," says the Oscar-nominated actor, who will be seen next in The Town.

Renner invests in good shoes because he knows they'll last. "I bought some black military boots in Amsterdam 8 years ago and they go with just about everything," he says. "I don't mind spending money on them because I know I'll wear the hell out of them." Have a cobbler add years to your new shoes with a stain guard and protective taps on the soles.