Remember that guy from The Hurt Locker, the badass you'd never seen before, who quietly dismantled car bombs and owned every inch of the screen? That guy deserves an Oscar. And he just might get it for his next act 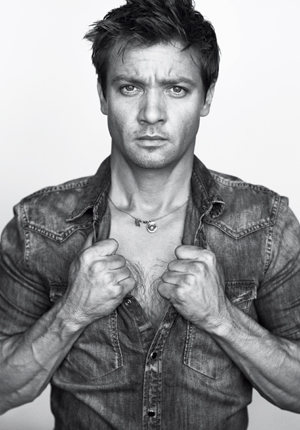 "The first one, and the craziest one," Jeremy Renner is saying, "was Sean Penn. I was backstage at the Palm Springs Film Festival, and it was really dark back there, and he comes over and gets in my face. And he's like, 'Dude, you were tremendous in Hurt Locker. You're going to the afterparty, right? 'Cause me and you are gonna have a few drinks, and I'm gonna talk to you.' "

Most of the past year or so of Renner's life has been about this weird. An invitation to tie one on with one of our finest acting drinkers? Nuts. This sort of thing isn't supposed to happen. Not to guys like Renner, nearly 40, previously best known for nothing in particular, drawn to parts in movies about tough-sell subjects like Jeffrey Dahmer and the Iraq war. Guys like that aren't supposed to end up as leading men in films that win Best Picture, let alone at the afterparty with Sean Penn calling them "dude."

But dude—Renner was indeed tremendous in The Hurt Locker, playing Will James, a risk-junkie army explosives expert who "saw a little bit" in Afghanistan, who was broken in ways not immediately apparent. We were supposed to wonder, along with the rest of James's bomb squad, if his scary calm indicated confidence or craziness; the part demanded an unknown quantity with the self-possession of a veteran. Somebody, in short, like Renner, who'd done fifteen years of quality work under the radar, quietly accumulating the kind of on- and offscreen experience that gives an actor a gravitational pull, becoming scuffed-up enough to be believable as a man who'd seen a little bit.

"He's somebody who audiences aren't so familiar with that they bring a set of expectations—like, 'Okay, I know that at the end of so-and-so's movies, A, B, and C happens,'" says Ben Affleck, who cast Renner in his latest Bahstin crime drama, The Town, out this month. "He's still really enigmatic and mysterious."

For now, anyway: As the loose-cannon bank robber who guilts Affleck into One Last Score, Renner steals The Town so decisively the performance qualifies as a heist in itself. And he's set to play the super-archer Hawkeye in Marvel Films' 2012 crossover-event movie The Avengers. It's as close to a sure-thing blockbuster as movies get these days, and it will make him as famous as Robert Downey Jr. and/or the Hulk. Until then, though, he's not giving up on the home-renovation business that paid his rent when acting didn't. "It feels good to have your money invested somewhere else," Renner says, "and then say, 'Fuck you, I don't need your damn movie.'"