Jeremy Renner, The Town – His eclectic film career culminated in the 2009 Best Picture The Hurt Locker which earned him his 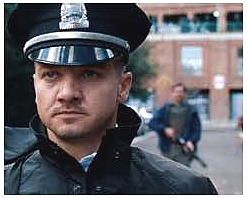 first Oscar nomination. He’s followed that up with a supporting role this year as an edgy career bank robber in Ben Affleck’s The Town and is again receiving awards buzz. Deadline’s Pete Hammond interviewed him:

DEADLINE: What did getting that Best Actor Oscar nomination personally mean to you?

JEREMY RENNER: It wasn’t until they actually announced it that I understood what it meant. It was something that no one can ever take away from me. People can say what they want, and they can speculate all they want, but that to me was something written in stone that you can’t erase.  That kinda felt really cool, like wow, this happened and it’s documented and it’s tremendous!

DEADLINE: Does it put pressure on you to make the right kinds of choices after?

RENNER: You always attempt to do great work, but there are so many things in filmmaking that get in the way. It’s all obstacles. So much can go wrong. So it kind of worked out in a wonderful way having The Town because Ben did a wonderful job with the film. I felt like we got very lucky. It’s so great that, again, I am a part of a movie that was pretty well received with critics and then audiences seemed to love it.  It ended up making quite a bit of money it never should have made. These are movies that Hollywood just doesn’t make at least in the studio system.  So I was happy for Warner Brothers and Legendary Productions for taking the chance with this. And it’s better for everyone. For actors, you don’t have to do a 3D movie just to work.

DEADLINE: What made you really want to do The Town?

RENNER: A great character in a character-driven drama hidden in an action-packed bank robber heist movie. Now initially I knew it was a really well written role and it came from a really tremendous book, Prince of Thieves. I thought it was pretty electrifying on the page, and then I couldn’t wait to dive into it. And I wanted to work with Ben who’s so affable and smart and gregarious. And the mood he puts out on the set, it’s so comfortable that it just allowed for a lot of creativity. You could try something new every day. It was really, really fun.

DEADLINE: Does that come from the fact that he’s an actor too?

RENNER: Well it certainly helps. It’s a different vibe. Some directors want to try to convey different things to an actor and it’s very difficult and they’re not quite sure how to say it. But Ben was hands off. So was Kathryn Bigelow, and she’s not an actor. She would say, ‘you’re the man for this, you go do it.’ Ben was the same way. He would say that directing was 90%  in the casting and in cinematographer and the crew that he had. It was his movie to really screw up.

DEADLINE: Does it inspire you to want to direct your own projects?

RENNER: I certainly want to experience more. Not that I ever want to star and direct in something, That’s a feat that’s pretty terrifying. But I’ve always wanted to tell stories in some other fashion than acting. So I have certainly watched how he handled himself along those lines. He asked a bunch of other people who starred in the movies that they directed, ‘What do I look out for? What are the pitfalls?’ And I think that’s really smart. That’s the main reason I did the movie. I asked him, ‘Ben, what makes you think you can star in and direct this?’ And he said ‘I don’t know how I’m really going to be able to do it.’ And then he told me not knowing anything allowed him the freedom to fall on his face.

DEADLINE: Was it intimidating to go into his hometown of Boston?

RENNER: The only thing I was concerned about was the accent. I knew the role I could do in my sleep. But I had to get over the fact of being freaked out about the accent because that can really ruin a movie and I didn’t want to be a part of ruining a movie. So we did the work on that.   Once I got to Boston, it wasn’t about being intimidated at all. It was just a color palette that I couldn’t wait to access. Ben put me in front of a lot of guys that had robbed banks or had just gotten out of prison or were similar to my character in a lot of ways, and I just got to absorb what I could from these people who were very generous with their time. I’m very thankful for that.