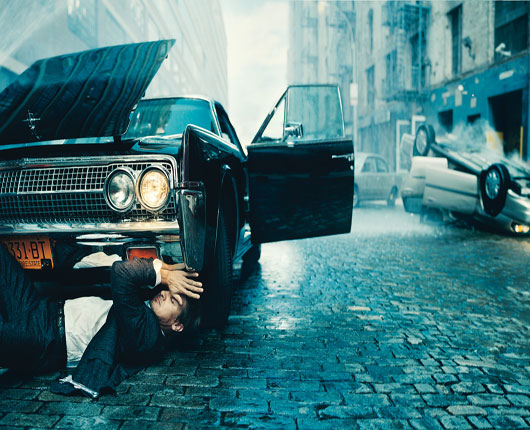 When Renner says he's given up his life for his job, this is what he means: "I never dated, because I couldn't afford to date. I didn't even have electricity. You try to put a positive spin on it, like, 'Hey, this is so sexy—look at all these candles!' But I loved what I was doing. The sacrifices I made in personal relationships had the biggest effect on my life. Even now, any woman would take a No. 2 seat to my job."

His longest relationship lasted five and a half years. That was in his twenties. Marriage was off the table because he couldn't see himself as a solid provider. Or, as he puts it, "'What the hell are you doing next week, motherfucker, let alone 40 years from now? And are you willing to wipe my ass when we get old?'"

We've moved from coffees to Guinness and Bloody Marys and from Pete's Tavern to the bar at Renner's hotel, where he checks on Franklin.

He's not seeing anyone now: "There've been a handful of girls over the last years. But it's been very difficult. How does it go any further?

"I have a wonderful life, but it means nothing if it cannot be shared. That's all I'm missing right now. It's a little unbalanced for me. Right now the only thing consistent in my life is that little dog. That's why I got it. I was getting really lonely. I needed somebody or something to be there with me through the whole journey."

It's not surprising that in Renner's dating vacuum, the worst bottom-feeding websites have suggested there's something more to his relationship with his pal and sometime housemate Winters. The unwanted attention nauseates him, even as he understands its causes. "I don't pay attention to that horseshit. Build 'em up to bring 'em down?" he says of celebrity culture. "I'm not going on that train, my son. I'm not going on that train. I'll walk. I'll take a bike." He lets out a laugh that sounds like a lawn mower starting up. "I'd rather just not be popular."

The Renner Frankness is like the Renner Stretch: He's not afraid to go there, do that. One reason is he's spent two decades outside the glare of public attention, shining an unforgiving light on himself: Every year he draws a Life Awareness Chart. An actual, written annual reckoning of how he's spent his time (work, family, friends, singing in bars, skin-diving with tiger sharks, whatever), annotated with notes about what needs to be cut out or improved. "I love it, and it's fucking hard," he says of his brutally honest self-evaluation. "Being conscious in life is hard. It's easy to be unconscious, to be drunk and a lot of things. I want to be those things! But I've been cursed with the desire to get aware . . . Goddammit!"

Kathryn Bigelow, who won Best Director and Best Picture Oscars for The Hurt Locker, told me she's always impressed by the choices Renner makes: "It says a lot about what drives him as an actor. He's taken some extremely challenging roles and confronted them head-on. That takes a kind of fearlessness that translates on screen, and the results are astonishing."

Brad Bird, the Mission: Impossible director (and Oscar-winning writer and director of the animated blockbusters Ratatouille and The Incredibles), tells a story about the tension during shooting: "There's a scene where several team members are in each other's faces. It was exhausting. Jeremy was getting really pissed off because it was hard to stay at that pitch. He screwed a line up and went, 'Yearrggggghhhhh!' and let out a bunch of expletives and just said, 'Let's go, let's just go!' And he was fantastic because all of his frustration came through. I said, 'I know you hate me right now, but that's probably going to wind up in the film.' And it did."

Harnessing the tension, pushing through the setbacks, keeping things interesting to keep himself engaged—this is the Jeremy Renner Story. It was what he did before his mid-career ascension to the major leagues. And you get the feeling it's what he'll do long after the star-making machine has anointed someone new.

"The thing I feel very, very blessed about is that what makes me feel good about my job is also what audiences and directors seem to like. I'll do things that people don't like and that's fine. I just want to continue to work and, if I get the opportunity, swing for the fences." He pokes me in the arm. "I'm not gonna go for a single. I'm not gonna go for a layup," says Renner, cocking a smile, looking like he's going to either hug me or slug me. "I'm gonna slam-dunk that motherfucker—that is the intent."