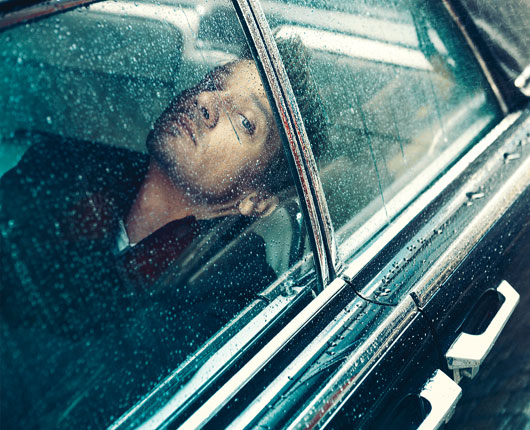 The hands-on physicality of rebuilding those houses always served as a hedge against the uncertainty of a career in the fickle movie business. "Me and my brother"—meaning Winters—"would tinker around, and then someone would pay us twice what we put into it. So when I walked into an audition, I could just think about: 'Can I contribute to this movie? If not, fuck it, I'll go build a house,'" he says. "Building a house is like producing a movie. There's no right way to do it but a lot of wrong ways. You have to be flexible and creative. You have to move fast, be prepared—or it quickly becomes costly. These sound like life lessons. It's certainly affected how I approach my life."

Since The Hurt Locker, he hasn't had much time for renovations. Life, he said, has splintered into five-minute chunks, with people lined up, each wanting a little bit of his time. "It's a wonderfully high-class problem to have," he says. "All these people want you to be in their movie. Or work with you. Or maybe they want to kick you in the balls. Half the time I don't know. But it's better than wondering if I have to write a play and direct it myself just to get that next job."

Now he's got work lined up into next year. Armchair casting directors are eager to place him in future Mission: Impossible films, hoping that his character, Brandt, rises from Cruise sidekick to inherit the franchise. Renner's not so sure. "Other people can think ahead all they want," he says. "I just focus on the task at hand and try to move on." Despite the physical fun (and hefty paydays) that comes with big action series, he wants to keep doing the smaller, more personal films he's always enjoyed. "I'm blessed to have cool roles in these big movies. Because nothing against Transformers, but thank God I don't have to do a monologue to a robot. I don't know how Shia, God bless him, does that."

Some life turns demand specialized advice: "I had to ask Charlize Theron, a very good friend, about going through an Academy Award campaign. She told me to take it moment by moment. Don't fucking freak out, just have fun."

From his pal Colin Farrell, he learned to look everyone in the eye, treat everyone as an equal, and try not to let the whole nuttiness overwhelm him. "Colin had an interesting trajectory," he says. "Not too dissimilar to what's been happening to me, but he was much younger. He had five movies come out in one year. He exploded, then sort of imploded. One night I was talking with him—mind you, with some drinks in us—and he said, 'I look at it this way: I could fucking always go back to Ireland and drink my fucking Guinness anytime.' I hold on to that."

What's fun for Renner, what's sustaining, are the gigs themselves: "This is the vacation. Work is trying to get a damned job. I skip to set every day."

While he is nimble and strong, it is pretty much impossible to imagine Renner skipping anywhere. There is a tenacious (non-miniature) bulldog quality about the man. His are not standard-issue movie-star looks. Instead he seems sturdily constructed out of familiar but disparate sources of American masculinity: There is the Eminem pout; a meaty, De Niro–esque bull-nostriled proboscis; the hooded, watery, fuck-or-fight eyes of Robert Mitchum. It's the veiled sparkle of the eyes that accounts for the disquieting directness. It can put you at ease or make you uncomfortable. Renner knows his unpredictability keeps audiences on their toes: "'Do I hate him? Do I like him? Do I want to fuck him or kill him? What the fuck is this guy?'" That essential uneasiness is, he says, a conscious part of his own brand, the key element he looks for in a character. The role of Jem, in The Town, was, he says, a perfect example: a bad guy who's all the more interesting for being disconcertingly likable.

Renner grew up in Modesto, California. His parents split when he was 8, both remarrying twice, the family growing every few years. He changed schools every year but says there was a lot of love, if not stability, in his home life. "I was a pretty happy kid," he says. "Fairly shy and happy, but underneath there were some other things going on." At 18, he took an acting class at Modesto Junior College and knew he'd found his outlet. "It became this very therapeutic thing because I got to express feelings I couldn't have otherwise. I got into the artistry of it, then studied psychology and human behavior. I really dug being an observer."

When he moved to Los Angeles in 1993 and got his first break in movies (Senior Trip), he fell in love with the closeness of the medium, telling stories through controlled gestures. "The smallest little thing or the fucking stillest nothing can reveal a whole lot. For whatever reason, I have a scary resting face," he admits with a pursed grin. "Stillness can be pretty interesting."

Tom Cruise is unrestrained in his praise for the interestingness of the latest addition to the Mission: Impossible team: "Here he is, he's a musician, he's interested in design, he's got a curiosity about life, and he's just, in every way, an incredible dramatic actor." For good measure, Cruise adds, Renner is "dynamic and an amazing athlete and very graceful with his action."

Still, it's hard to picture him skipping. "A funny thing happened when we were shooting in Dubai," Cruise says. He discovered that Renner has a little jig he does when he gets nervous, a spazzy little dance to loosen himself up. "I can't even describe the Renner Stretch. He's got a copyright on the Renner Stretch. I laughed so hard when he did it for me. I said this has gotta go in this movie. I said you gotta show [director Brad] Bird. You gotta show Bird! It's gotta go in right before this tunnel sequence we do. So it's in the movie. I don't think I could do the Renner Stretch justice, but he's an actor who's not afraid to do that and go there."