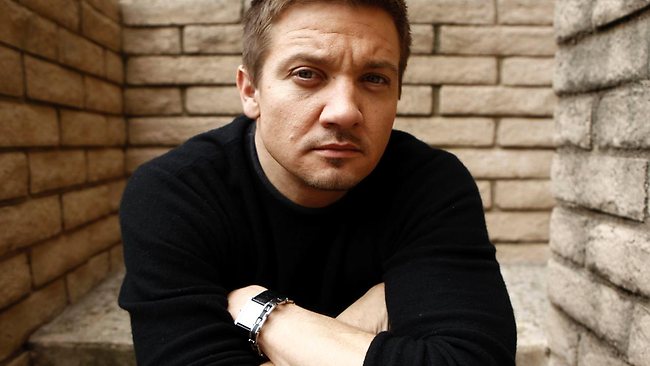 YOU'VE been busy with The Avengers, Mission: Impossible Ghost Protocol, The Bourne Legacy and Hansel and Gretel: Witch Hunters all shooting back to back.

It's certainly a ride. It's tested me personally, artistically, physically. I don't know if I've passed the test - I don't even think I passed 'Go'! I certainly haven't collected my $200.

>> Did you see this action hero niche coming your way?

No. It started off with wanting to do something on a world stage - The Avengers. I love what Marvel do in that universe, so I thought, 'I could give that a go, why not?' I've never been a part of a movie people are gonna go see all around the world. I've done a lot of movies nobody's ever seen (laughs). So that opened it up - then Mission came around, then Hansel and Gretel, then Bourne. It all snowballed in a wonderful way.

>> You've forged a reputation on smaller projects, such as The Hurt Locker. What's the reward for you doing big blockbusters?

I dunno, none of these have come out yet! But, wow, what a great reward to be part of a big Mission franchise and work opposite the biggest movie star for the past 30 years.

>> You don't seem like the type of guy who'll just take any old job to pay the bills.

No. Never. Never. Never. Never. No matter how big the stage or the set or the budget, it doesn't matter - it still needs to have two, three, four basic elements I require. I don't care what point it is in my career, I need to feel like I have something to learn and grow and offer - otherwise, why do it?

>> Aren't you supposed to sell your soul to make it?

Oh, I dunno, I feel like there are opportunities to do that around every corner. But I don't know that road.

>> How did you measure up to Cruise in the action stakes?

I've said it a few times, but I really believe it: Tom Cruise has 48 hours in a day, when we have 24. He may sleep ... every once in a while. Literally, he'll be up two hours before work, training, then put on the producer hat and make sure everyone's happy, then go home and be a dad for a minute, then he watches movies! How in the world? I went home and I passed out!

>> Can you get a bit lost on a big blockbuster?

It certainly had that feeling on The Avengers. Maybe I'm in the movie, maybe I'm not, I have no idea. The scale is out of this world. That's where I felt like a token, a little pawn chess piece.

>> Mission: Impossible director Brad Bird says there's a scene where you got angry - for real - and he left it in the film.

(Long laugh) Yeah, there were a few spots where it was a bit frustrating and I'm not shy about letting that out on myself. I'm not sure exactly what point that was in the movie - there's probably several moments (laughs).

>> There is talk you might inherit the franchise from Mr Cruise one day ...

I dunno. There are possibilities in any franchise ... But that's also assuming I don't die in this movie, so you may be overstepping your boundaries.

>> Did you realise early on what a huge opportunity The Hurt Locker would be?

Without a doubt. That kind of role doesn't come to actors like me, which is 90 per cent of the actors out there: we all do our bit trying to just get a job, then every once in a while lightning strikes. But don't get me wrong - I never thought that movie would even see the light of day. 'Is this going to go to four theatres? Or go straight to iTunes? F---ed if I know.' But it wasn't about that, ever. It was about the opportunity of a lifetime, to work with Kathryn Bigelow and have that role.

Being a late 30-year-old man when this attention started coming was a blessing. Taking my mum to the Oscars, for instance - sharing that experience, and as wide-eyed as I was, not getting out of my head, being present and enjoying it.

>> There are some amazing locations in Mission ...

That's an amazing icing on the cake. You also travel to s---holes (laughs). I've shot a lot of heavy, intense stuff - that doesn't happen in Hawaii.

>> You've said of Tom that his life is movies. Does that also sum you up?

Yeah, my life is my job as a sort of primal hunter and gatherer.

>> Have you gathered enough to be able to support your loved ones?

Absolutely. What a selfish bastard I have been for so many years, as a broke-ass actor, to endure that life ... I don't need very much money to live, I've lived on very, very little most of my life. So what I do get, it's a wonderful feeling to take care of people. To buy my mum a house - what a great feeling.

>> You could have built mum a house - renovating has been your side job for years.

Well that's what we did! We did a re-model for her.

>> On all these action films, what's your best injury?

It's probably to my ego (laughs).