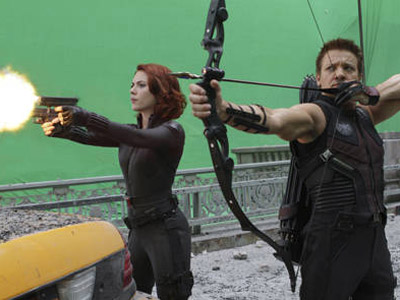 'The Avengers' is wall-to-wall, larger-than-life superheroes: New to the big-screen is Hawkeye, the least-well-known of the Marvel film clan. 'We've only seen glimpses of him so far in 'Thor' and that awesome first trailer, so Jeremy Renner's here to enlighten us about the marksman, whom he calls "more badass" than the spies he plays in 'Mission: Impossible - Ghost Protocol' and the upcoming 'Bourne Legacy.' Although he's been sworn to secrecy, he did confirm that most of his scenes are with Scarlett Johansson and that he doesn't have much screen time with Robert Downey, Jr. Unless he does. We're not quite sure.

To a lot of people who've just seen the movies, and never read the comics, Hawkeye is an unknown quantity in the 'Avengers' universe. What can you tell me about Hawkeye, for the movie-only fans?

Not a lot. It's really because I don't know. It's a huge movie. There's a lot of characters in it, so there's not a lot of room for backstory or character development. He comes more from The Ultimates universe than the old school Marvel with the mask. I couldn't even talk about that before the costumes were revealed. Now that that's out, it's definitely more The Ultimates version of the character. Definitely seems more authentic, which is why I got involved in the first place. Marvel started creating these superhero movies that are pretty plausible for a superhero movie. Like the whole Iron Man thing was like, "Wow, I could kind of buy it." It actually could kind of happen. I thought they did a really good job and obviously with Downey and getting to work with him at some point. I still didn't work with him on 'The Avengers' much.

Are you saying he was in character as Tony Stark the whole time or you just don't have many scenes with him?

Well, I would see it tomorrow, if I could!

So would I, actually.

Have you seen any of it?

No. And I have no idea what it looks like. It's just too big of a movie in scope for me to grasp. I feel like I'm just a small little pawn in the Joss Whedon world of 'The Avengers' film.


What's it like bring all these totally iconic characters together?

Awesome! Awesome! Mind you, it happened only once [pauses to think] ... twice, we were all together. Just on the set on the same day, let alone be together. Now, that was fun. When we were in Central Park, everybody was in costume... [pauses] nah, not everybody. I wasn't in costume. Scarlett wasn't. But just to have everybody there... it's a hoot.


Does Hawkeye have the history with Scarlett's character in this that they have in the comics?

There is some stuff in there with Scarlett and I, yes. But again, I can't speak to what it is. But yeah, I do work with her quite a bit. More than anybody else, I can say that, only because there's ties from the past. You can't get into the history of it, but certainly, they spend a little time together.


Are we going to see a standalone Hawkeye movie?

Oh, I don't know. I don't have control over that!

That's another "I don't know." They'd have to want me to do it. And I'd have to make sure that there's enough there to go do it. Don't want to do it just to do it.

Yeah, you never know in the Marvel universe. Keeps it exciting.