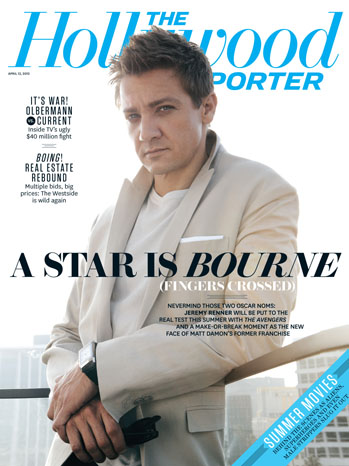 The say-anything new star of "Bourne" wrestles a wolf, box-office hopes and rumors about his personal life as expectations mount on the two-time Oscar nominee to save one franchise (that Matt Damon left behind) and help jump-start another (Marvel's "The Avengers").

This story first appeared in the April 13 issue of The Hollywood Reporter magazine.

In a town of A-list actors and wannabes, a certain media-trained polish is expected. You artfully dodge questions that are troubling; you steer clear of controversy; you smile and measure your words carefully in the presence of anyone who actually might print what you say. But actor Jeremy Renner, 41, on this Thursday night at West Hollywood's Soho House, clearly missed his Self-Editing 101 class. Or one might imagine, he ditched it, smoking on the loading dock behind school.

Sipping vodka and eating a Caesar salad, he freely tells this reporter he took drugs when he was younger and likes to get "wasted" every now and again (but, mind you, he says, only in moderation). He tells the story of how, on Christmas Eve a few years back, when he was with his family in a bar, "This guy chokes me with the scarf I was wearing. He called me a fag 'cause I was wearing a scarf! Then he shoved my sister and I got behind him and I choked him out -- put him to sleep." Without a trace of irony, he adds, "I'm not violent." Although, he says, "I'd have gone to prison" if he'd been present when a family member recently was raped. Oh.

Asked about an incident last year in which singer Christina Aguilera crashed his birthday party and ended up in his bed (without him), Renner shrugs. "She was just chilling in one of the bedrooms," he says. "I was happy to meet her. I was a big fan. Mind you, I was probably pretty shit-bagged at the time."

And what about that much-reported knife fight in Thailand in January? "It was a silly, tragic accident that happened to this guy," explains Renner, noting that he had gone to Phuket for a break when an acquaintance made a comment and "got attacked in a bar fight at 4 in the morning. He was saying stuff, and 20 people jumped on him. I was in flip-flops. I don't do bar fights. Did he deserve to get stabbed and almost murdered by 20 people? F-- no." (Six local men were arrested.)

Most recently came the death in March of his 8-month-old French bulldog, Franklin, of a heart attack. For a moment, Renner's eyes go moist because the puppy touches on the singular problem that has most bedeviled him the past two years. Says Renner, "He was my solution for being so lonely."

A mix of talent and tough guy seemingly missing from Hollywood's current runway of top male stars, Renner is an anomaly among his peers. He is older than your average up-and-comer (Ryan Reynolds is 35), less pretty (compared with, say, Taylor Kitsch, 30), and rough and rogue in a way that makes one think of Daniel Craig or even a young Harrison Ford. But while his peers might beat him in a Handsome Man Contest, the Modesto, Calif.-raised Renner dwarfs them in accolades with his Oscar nominations, first for 2008's The Hurt Locker and then for 2010's The Town. "He's like George Clooney: When he hit it big, he was no wunderkind," says Tony Gilroy, co-screenwriter and director of the fourth Bourne movie, The Bourne Legacy, which will be released Aug. 3 and for which Renner was paid $5 million. He adds that Renner is the type of actor who'd "seen a lot of less talented people make it and not them. Now he has pride of ownership and an eagerness to hang on to it."

Adds Donna Langley, co-chairman of Bourne studio Universal Pictures: "Every few years, an actor comes along who is undeniably eye-catching. Jeremy leaps off the screen with his raw talent and charisma. He's a real star."

But awards and buzz are one thing, box-office performance another. While Renner's role as Hawkeye in The Avengers, Marvel's $220 million almost slam-dunk blockbuster out May 4, will up his marquee value among a cast of all-stars, it is his turn in Bourne Legacy that will have the industry obsessing. After all, Renner -- who, before Hurt Locker, had starred in 2002's Dahmer, about the serial killer, and the short-lived 2009 TV series The Unusuals -- has yet to prove he alone can shoulder a box-office hit. And this fourth Bourne movie, with a budget of $125 million, is crucial to a studio eager to revitalize a 10-year-old venture that turbulently lost its lead, Matt Damon.

Damon had refused to sign on when Paul Greengrass, who directed the second and third Bourne installments, pulled out. He compounded the series' problems in a December GQ interview in which he lambasted Gilroy's original script for 2007's The Bourne Ultimatum as "unreadable," adding: "This is a career-ender. I mean, I could put this thing up on eBay, and it would be game over for that dude." (Damon later apologized, but he and Gilroy haven't spoken since. Renner says he won't get involved with others' disputes.)

After Damon's withdrawal from the fourth Bourne, Universal chairman Adam Fogelson and Langley had to scramble. Gilroy (who'd written all three Bourne films) was adamant the series needed a new character, Aaron Cross, who doesn't exist in any of the Robert Ludlum spy books on which the movies are based but who inhabits the same super-secret world as Jason Bourne.

Upon completing his script and coming aboard as director, Gilroy, in October 2010, started screen-testing multiple actors for the role and favored Joel Edgerton (Warrior) and Oscar Isaac (Drive) until he met Renner.

"He wasn't on my 'available' list of people for a long time; he wasn't on the first five lists I looked at," Gilroy notes, simply because Renner was filming so much.

In March 2011, Gilroy and producer Frank Marshall flew to Berlin, where Renner was shooting the Will Ferrell/Adam McKay-produced action-comedy-horror film Hansel and Gretel: Witch Hunters. After that dinner, the massive superstructure behind any franchise -- Gilroy, the studio, Captivate Entertainment and the Ludlum estate, which has casting approval -- agreed Renner was their man. "This character knows exactly who he is and remembers too much and has a very different self-preservational issue [from Jason Bourne] that required a lot more danger and intellectual activity," says Gilroy. "It's about combining verbal nimbleness and physical danger."

But Renner hesitated. "It was a game-changer in anonymity," he says, "and I like my private life and my family. I had to consider how this was going to affect everyone I love -- especially myself."

That meant weighing not only the toll of making five films back-to-back (including Bourne, The Avengers and Mission: Impossible -- Ghost Protocol) but also how it would interfere with a host of other passions: for buying and renovating property, returning to the stage, doing the macro photography he loves (above all, shots of anything with an unusual texture). Finally, after talking to his CAA agents and close friends, he said yes.