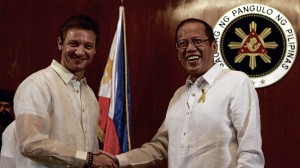 LOS ANGELES—“Wow, it was a really great experience,” Jeremy Renner enthused when asked in a recent interview about shooting a major portion of “The Bourne Legacy” in the Philippines.

Describing Filipinos as “welcoming and loving,” the actor obviously enjoyed his stay in Manila and Palawan, where he shot the latest installment of the hit “Bourne” franchise with writer-director Tony Gilroy, and co-stars Rachel Weisz and Edward Norton.

Jeremy also stars as Clint Barton/Hawkeye in “The Avengers.” He attempted to explain the appeal of comic book super heroes: “Comic books are meant to be fun. But I think the Marvel series on super heroes goes deep into the psychology of Greek mythology—how we all need a hero in life, while others use religion or a God to believe in something good.”

Although he admitted that he didn’t read comics when he was growing up, Jeremy said he recently saw “The Avengers” and was thoroughly entertained.

He credited Marvel Comics for grounding the material, citing the hero Thor as an example. “Thor isn’t just a god with a hammer and lightning, flying around.  He’s also a human being,” Jeremy said.

Below are excerpts from our interview:

How was your experience shooting “The Bourne Legacy” in the Philippines?

It was the third leg of the production. In its early stages, it seemed like a very small, contained movie because we were on a soundstage and it was very intimate. But as soon as we got to Manila, it opened up this whole section of the movie where it gets pretty intense. There’s a lot of people in Manila and we were out there in a very public way. As I’ve said, the production seemed very small. So we weren’t used to that (filming in public). You can’t really be prepared for hundreds of people on the street just watching us do our thing. But the people were welcoming and loving. They made it a luxury to shoot there. And wow, it was a really great experience!

What surprised you most about the Philippines?

I’ve never seen anything quite like it. Such beauty on those islands—more than seven thousand of them! I went to a couple and they were unlike anything I’ve seen. Beautiful!

But then you have this squalor, this absolute poverty. That’s hard to process. But the beauty is that the people living in poverty have the biggest smiles on their faces. I don’t know if it’s a genetic or a chemical thing in their brains, but they’re just a happy people! And it’s infectious. The Philippines is a wonderful place to be in and visit.

How cool was it to play a new character in a “Bourne” movie?

Aaron Cross in “Bourne,” I’ll tell you what the experience was like. It came right after “The Avengers.” After doing a big spectacle of a movie like “The Avengers” and a lot of green-screen scenes, it was refreshing to go to “Bourne,” which is a big action movie in itself. You look at all of them—the “Bourne” movies are very contained stories. They’re inside stories about one to three people at a time. It follows their journey. So it felt like a small independent movie that shot for eight months. (Laughs.) I’m very happy—the process was overall the most fun I’ve had in a long time. I couldn’t be more excited to see the outcome.

Does this “Bourne” movie have a different tone?

The tone is the same. Anybody who has seen or is a fan of the “Bourne” films as I am—it follows that parallel universe. It coexists with Jason Bourne. The movie stays with that tone, pace, and authenticity, and has the ferocity and intelligence that come with that type of thriller. The hand-to-hand action—the same guys who did all the stunt stuff on the first three “Bourne” movies are on this as well … I think the teaser that’s out explains it better and more eloquently than I could!

Do you think Jason Bourne and Aaron Cross will cross paths one day?

Who knows? Perhaps. That would be a very interesting story. I’d welcome that.

It was a huge deal for us to shoot in Dubai and to be in the Burj Khalifa, which wasn’t even completed yet at the time. That was unlike any place we’ve ever shot in.  Again, another great place, like we shot in Manila for “Bourne,” shooting in Dubai for “Mission.” A lot of times, productions will go to a location and substitute it for somewhere else. There’s a lot of pride in Dubai about the Burj Khalifa, the tallest building in the world, for instance. We shot it for what it is and didn’t try to make it as something else. It was the same with Manila. I think you get a little more sense of pride within the community because of that.

Have you met Matt Damon and did he give you his blessings and all that?

Yes, of course. He’s a great supporter of the whole process. I’ve known Matt for a little while. He couldn’t be a nicer guy. I met him at the Academy Awards. I was there for “The Hurt Locker.” He was sitting right in front of me. It was a really funny introduction.

Do you feel the pressure that “Bourne Legacy” has to be as good as the earlier films in the franchise, and that your Aaron Cross has to be as memorable a character?

There’s no pressure for me. I mean, the only pressure is like in any other job—to make it as interesting, honest, and authentic as I possibly can. If there is pressure, then maybe it’s more on Tony Gilroy. He wrote all the screenplays. And he’s directing this one. But he also knows that world like the back of his hand. So I feel pretty confident that the film will satisfy fans of the franchise. Again, I’m a fan myself. I think what the people will dig about the movie is how smart, visceral, and authentic it is.

Could you have imagined the success that you are having now?

I’m sitting here right now and I can’t believe it. For me, it’s a blessing just to work. When I moved to Los Angeles 20 years ago, I wanted to be in a movie that would be big enough to play in my hometown. I wanted to be in a part that was large enough so that I didn’t have to tell my mom, “I’m the guy in the red shirt.” That’s what I told her when I got my very first job. That was my main focus. And then it moved on to other things from there. Talk about fluidity! Things change in life. You take them as they come—the good, the bad, and the ugly. It’s a great feeling.

Since the success of “Mission Impossible,” do you get recognized more often in the streets?

I think so, yes. It’s hard to say though because I’ve been gone the entire time. The roll started with “Mission” and I’ve just finished shooting. I’ve been out of the country for almost two years. Does it shift and change? I suppose so. But you never know. Like maybe I’m big in Botswana? I don’t know. I haven’t been super recognizable. It was a big, big thing to be shooting in the Philippines though.

So no paparazzi following you yet?

No, it’s not too bad. People are pretty respectful. They just want a picture so I give them a picture and then you move on. And they leave you alone.