Jackson finally gets to do some fighting alongside Iron Man, Captain America, Black Widow and Thor 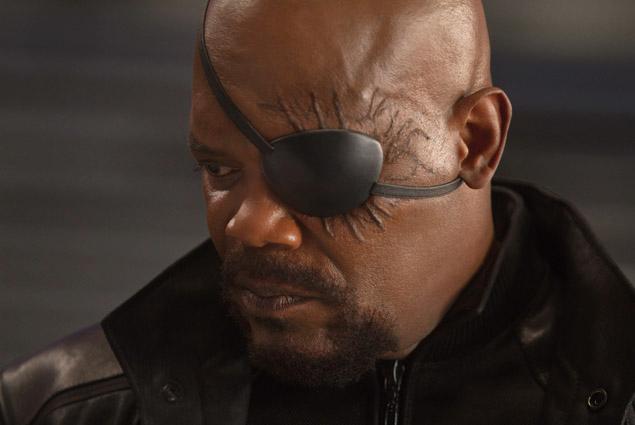 While thumbing through a comic book, Samuel L. Jackson spotted a familar face — one that looked strikingly like his own.

In that 2002 issue from Marvel Comics, the coolest geek in Hollywood spied an updated version of eye-patched government agent Nick Fury.

“So I was flipping through it and I saw [a panel] where they go, ‘If they make a movie about you who do you want to play you?’ ‘Samuel L. Jackson,’” says the 63-year-old star of “The Avengers.”

And it ultimately did

“We were all huge fans of Samuel L. Jackson here at Marvel,” says the publisher’s chief creative officer Joe Quesada. “The

idea was to create an African-American Nick Fury, but it wasn't really until the artwork came back that we realized, ‘Wow, he could be played by Samuel L. Jackson.’”

Marvel Studios chief Kevin Feige got Jackson to put on an eye-patch and play Nick Fury for a cameo at the end of the credits of 2008’s “Iron Man” as a gift to fans.

It was also the first hint that the studio was building toward a larger universe — to include franchises for Thor and Captain America and culminate in the superhero mega-franchise, “The Avengers,” which hits theaters this Friday.

This larger universe needed Nick Fury at the center of it: Marvel signed Jackson to a nine-picture deal after “Iron Man.” He certainly is a huge upgrade over the last guy to wear the eyepatch, David Hasselhoff, in a 1998 TV movie.

What made Jackson think there would actually be nine movies?

“I don’t know, they still haven’t [made them],” he says with a completely straight face. “We're only up to five.”

In “The Avengers,” Jackson finally gets his chance to do some fighting alongside Iron Man (Robert Downey Jr.), Captain America (Chris Evans), Black Widow (Scarlett Johansson) and Thor (Chris Hemsworth).

With “Shaft” and the “Star Wars” prequel under his belt — he still owns his lightsaber with the letters, “B.M.F.” (a phrase not appropriate for a family newspaper) on the handle — Jackson knows how to defeat his enemies.

“It’s a great to pick the bazooka up, run out the door, shoot it at a plane and hit it,” he says. “It’s kind of great to stand behind a door, grab a guy’s gun, flip him over and all that other stuff. Bust over a few caps and jump out a helicopter, shoot a few people.”

Jackson said it’s also great to work again with actors like Jeremy Renner, who played one of Jackson’s team of snipers in 2003’s “S.W.A.T.” This time around, Renner, 41, plays the Avengers’ resident archer Hawkeye, who once more answers to Jackson.

A lot has changed for Renner since the first time they worked together — most notably his breakthrough role in 2008’s “The Hurt Locker,” which earned him the first of two consecutive Oscar nominations. The second was for 2009’s “The Town”.

“It’s a wonderful blessing and opportunity,” says Renner of his “overnight” success after a decade of toiling in the business. “And very, very fortunate that it’s come to me later on in life being a bit more self aware and fully realizing as a man I have a little bit more of a skill-set to endure the onslaught of things that were coming at me.”

The real onslaught that has come at him recently is a non-stop barrage of action movie roles: “Mission: Impossible — Ghost Protocol” to “The Avengers” to “The Bourne Legacy” (as Matt Damon’s successor) to “Hansel and Gretel: Witch Hunters.”

“I slept for four hours a night for nearly four years,” he says. “I would like to sleep more than that, but I just didn’t have the time to. And it worked to my advantage, not that I recommend it to anybody, to do four action movies without a break.”

There were few breaks training for “The Avengers” with fight coordinator Jonathan Eusebio, who also worked with Renner on “Bourne.” For a two-minute fight sequence between Hawkeye and the Black Widow, Renner and Johansson had to train for months for the Wushu (kung fu) choreography.

“In that fight sequence, I strained my neck actually,” says Renner. “And it was nothing glorious, it was just my bow string got caught on my quiver or belt or something because I was going to strike and I don’t know how it got all twisted, but I sprained my neck badly.”

After seeing the film for the first time at the premiere in Los Angeles, sitting in the darkened theater with his 3D glasses on and his mouth wide open, all that sweat and pain was worth it.

“It reminded me of being a young boy watching ‘Star Wars,’” he says. “I can't believe I'm in this movie.”