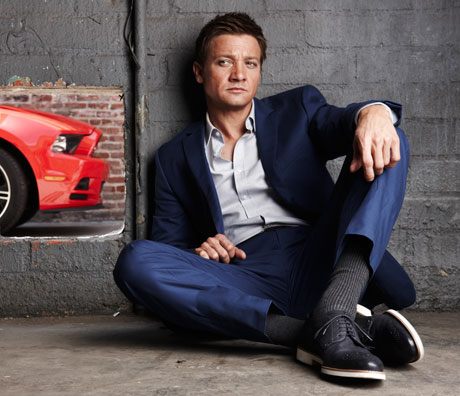 Renner finally moved out of that apartment when, later that year, he signed his first contract for a studio movie, S.W.A.T., a pure testosterone shove. At the time, he had $200 to his name, but he took that contract to a bank, and along with an actor friend named Kristoffer Winters, he pooled enough money to buy a house in Nichols Canyon. "I hated paying rent," Renner says. "It was just money going out the window." He and Winters did some work on the house, which was a cool 1960s modernist place; they found they had a shared knack for the remodel. Many people admired the house. After only a few months, some people admired it so much that they offered Renner and Winters $900,000 for a house in which they had invested $659,000. They had made more in a few months than they had made in their entire lives.

Which meant that they bought another house. And then another house. And then a condo in the Granville Towers. And then another house. Driving around today, Renner points to house after house — he calls them structures — that he fixed up either alone or with Winters. Since 2002, they've bought and sold more than fifteen houses, each time slightly bigger, each time slightly braver. They've often lived in their temporary, torn-up structures, without plumbing or power, trying to squeeze out a few more dollars. "I can tell you every Starbucks that had a bathroom around here," Renner says.

He stops outside a Greek Revival beauty in West Hollywood, mostly obscured by a towering row of ficus. He and Winters planted them; instant ficus forests, craned in, are one of their signatures. "That is an amazing hedge," Renner says, admiring its recent growth. He and Winters bought the house, which they dubbed Hemingway House, for $1.55 million in 2008. About a year later — in the midst of a historic real estate crash in California — they sold it for more than $4 million. They are not hobbyists; they are expert at this. "I will never be in the stock market," Renner says. "It's just gambling. I'm a gambler, but I'll gamble on the practicality of things. If I'm all-in on a structure, at least I can sleep in the damn thing."

Meanwhile, he continued the same kind of slow, interlocking build of his acting career. Supporting roles came first. He was cheap and good. Then he played the lead in Kathryn Bigelow's The Hurt Locker — she'd liked him in Dahmer — for which he earned his first Academy Award nomination. (He was renovating a condo at the time, his mattress on the floor, zipped up behind plastic. He was worried about plaster dust getting on his tuxedo.) He was reportedly paid only $65,000 for that part — he's getting $5 million for The Bourne Legacy — but his success with the houses had made money a secondary concern. He found himself in a rare, blessed spot. "I always wanted to make good decisions," he says. Now Renner never had to take a part because he was desperate. Instead, he found his cinematic wheelhouse, and he stayed in it: intense, sweaty, morally ambiguous roles, drifting occasionally into mean little bastard territory. Action didn't hurt. And off he went, one of the few fortunate actors who could draw his trajectory with a ruler, getting another Oscar nomination for The Town, which led to Mission: Impossible and then his joining The Avengers and now, finally, his carrying The Bourne Legacy. Rung by logical rung, all the way to the top of the ladder.

He stops the Porsche once again, outside yet another house that he and Winters renovated: Sturges House — Charlie Chaplin was supposedly married in its living room — rises above another wall of ficus. Renner lived in the house until relatively recently, when he started hearing the vans filled with tourists shouting on the other side of the trees, when people started sliding strange packages under his gate. He could feel his reality changing, the specter of Milo the cat looming large. "I couldn't even take my garbage out anymore," he says. "It bummed me out." A bizarre confrontation with a mobile, militant yoga class was one of the final straws. "Look, man, I don't come onto your porch and start doing deep lunges," Renner told them. "Get the fuck out of here." But he knew what was coming. He put up his house for rent and moved into the Four Seasons, and only yesterday he bought another house, a retreat, hidden back up in the canyons. He hasn't taken possession, except in his head. Now he wants to go see the future.

It's another 1960s house, 1964 to be exact. Flat roofs, sharp angles, square shoulders. Airy, with lots of glass. Renner walks around it, pressing his face against those windows. It's a very cool house. It's not hard to see what he sees, or at least what he sees in it today. It's harder to know what he sees it will be. "This will probably be my home forever," Renner says. It's remarkably intact, and he says he's going to try to preserve most of its character. The former owner — who died recently — lived in this house a long time, and he had taken care of it. "I want to do good by this guy," Renner says, admiring the huge brick fireplace that will soon be his. "A lot of people like to tear shit down here, and it breaks my heart. This town's already so transient."

The former owner's belongings are still in the house. It looks almost like a museum, like a time capsule. In the office, there are dozens of faded framed pictures of the man and all the places he had been, a permanent record of his existence: There he is in front of the Kremlin; there he is in front of the Leaning Tower of Pisa. And above his desk, where he could always see it, there is a map of the world on the wall.