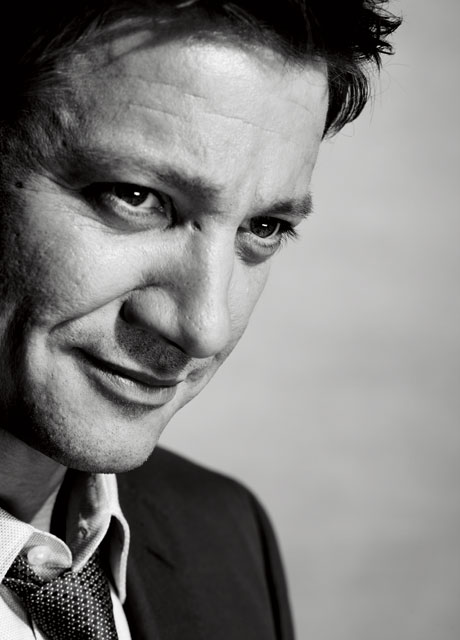 Renner parks outside 7777 Hollywood Boulevard. He lived in this little collection of apartments, in a studio on the ground floor, for five years, back in his karaoke days. It remains the longest he has lived anywhere since he was a child. It wasn't his original Hollywood address, when he first moved here from Modesto in pursuit of the usual dreams — that was 1635 Formosa Avenue, which, at the time, was a pretty sketchy little spot. (Renner remembers walking out his door one morning and stepping over a man who was lying prone on the sidewalk, in the gun sights of a couple of cops.) But 7777 Hollywood Boulevard was his launching pad. His friends took over all the apartments in the building — "It was like Melrose Place," he says — and mostly things went well for him here, even though he was broke, and even though he struggled to get work during the day and spent his nights howling at Barney's Beanery. He was living in this apartment when he got his first significant part, in 2002, playing the true-life cannibal serial killer in Dahmer. It was a small movie, shot quickly, but people who were drawn to it were really drawn to it. That's when Renner first started being recognized on the street; unfortunately, it was by the sorts of people who might connect with a murderer who kept the heads of young men in his fridge.

The hot girl who bit Renner deep into his arm, sending him to the hospital for shots, was only his second-weirdest encounter with admirers. The weirdest was an older man, maybe in his sixties, who started popping up a little too often in the places Renner hung out back then: in the coffee shop around the corner, at the record store. The man kept saying, Gee, what a lucky thing this is, running into each other like this, maybe it's a sign, maybe we should go get a drink, and Renner always demurred, never really thinking all that much more about the guy and his repeated appearances.

It wasn't until the man showed up outside Renner's apartment that the truth began to register. Renner was walking his dog, and the man bumped into him: Here we are again, can you believe it? Do you live around here? Renner said, Oh, no, just walking the dog. Once again, the man asked Renner to go for a drink. And this time, when Renner said thanks but no thanks, the man got upset. He started yelling. Renner hustled away, walking his dog all through those streets, around corners and behind hedgerows, blocks out of his way, before he finally decided he had lost the man, and he returned to his home.

He was sitting at his computer when he heard a noise outside on his patio. It was a coffee mug, crashing to the ground. Renner thought his dog or maybe his cat — he had a cat then named Milo — had knocked it over. He went outside to investigate. And there was the man. There was the man, and he had Milo in his hands. "He had my cat tucked like a football, under his arm," Renner says, sitting in his Porsche all these years later. Renner was stunned, frozen in a kind of low-level shock. The man bolted into the street. Renner gave chase, but before he could catch him, the man jumped into a car and squealed away. The man was gone, and so was Milo. Renner never saw either of them ever again.

"I hope Milo had a good life," he says today, firing his engine back up. "I hope he didn't end up as that guy's dinner."

We'll never know whether Milo the cat ended up in a patch of sunlight or in a pot on the stove. All Renner learned for sure is that accidents aren't always accidents.