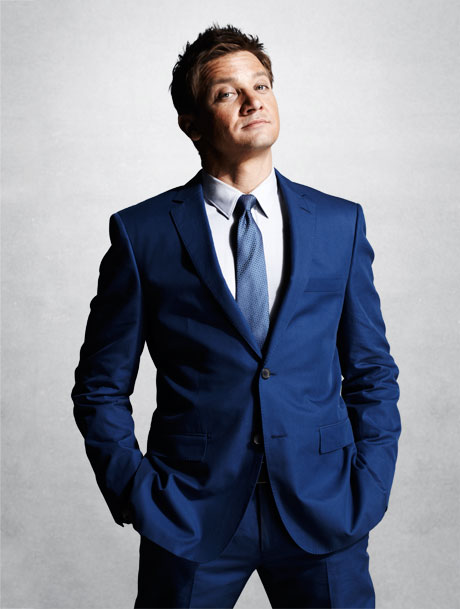 Published in the August 2012 Issue.

He wants to go back to the start.

It's nice to think that he knew back then that today was in his future, that he somehow picked this spot on the horizon — Academy Award nominations, blockbuster franchises — and pointed himself at it, and made his opening move, and then another and another, and now here he's finally arrived, roaring through these crooked streets in his silver Porsche, with the top down and the sun pouring in. It's nice to think that he might have been capable of single-handedly creating this present for himself, that the right combination of work and planning and sacrifice might take a not particularly tall or lean or handsome twenty-two-year-old California kid and turn him into this forty-one-year-old poster-sized man. Because if Jeremy Renner actually earned his way here, to his suite at the Four Seasons, to this bucket seat, to The Avengers and The Bourne Legacy, the bookends of our summer, just because one day he decided he was going to, suddenly we would have a process, a map that we could follow.

For instance: Five minutes into his journey back today, Renner gears down to a red light. Beside him, an open-roofed van filled with gawking tourists pulls up. He had just been talking about his growing fame, about the rise in his being recognized.

"Yeah, I go to a few spots," he said. "People will want to talk about something, that's fine. People for the most part — "

It's the driver of the van. She's looking down into Jeremy Renner's Porsche. He turns to look up at her, so slowly that you can almost hear his neck creak. But now his face flashes with recognition.

"I told you that you'd be in a movie with Tom Cruise, didn't I?" And if this woman driving the tour van had somehow told Renner such a thing, she became remarkably right when he starred alongside Cruise in Mission: Impossible — Ghost Protocol last winter.

"I don't know about that specifically... ." Renner says, smiling. "Are you singing to these people?" He turns to address the admiring tourists, now taking pictures of the movie star idling beside them. "She's a tremendous singer," he tells them.

"Thank you," she says. "You want to go to Barney's? Is that where you're going? Are you going to Barney's?"

"Not anymore, huh? I'm so happy for you, my brother. Good to see you."

"Thank you, darling." Then the light changes, and the conversation's over. Renner turns left; the van goes straight.

"Amazing," Renner says, mostly to himself. What are the odds? Of that particular tourist van, at that particular red light? A tiny accident of time and place, and Renner's exactly where he wanted to go, back before all this.

"I used to hang out at karaoke bars all the time. It was the most fun you could have when you had no money. I went right here twice a week" — and Renner points to Barney's Beanery, a beer-and-burgers-and-karaoke place that conveniently appears to his right — "from 1995 until, like, 2002. Religiously. And she was one of the gals. There was a whole clan of people, this circuit of people. We'd get together and just have the best time. You know, she was a tremendous singer. A really, really great singer."

That's what she wanted to be. Now one of them drives past Barney's in his convertible Porsche, off to retrace his path to gigantism. The other is serenading her open-topped van filled with tourists. How do two people who start in the same place find themselves at such different spots on the horizon, if not for the stars?