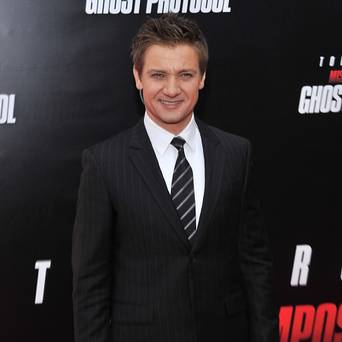 Jeremy Renner is "very happy" to have been skipping the gym for months.

The actor has been training back-to-back for action movies The Avengers, Mission: Impossible - Ghost Protocol and The Bourne Legacy and the required fitness levels are a chore to maintain.

While exercising helps him to work better when performing stunts, Jeremy isn't a fitness fan in his personal life.

"Get out of shape? No, I haven't [had the time]," he laughed to Access Hollywood on the red carpet of newest film The Bourne Legacy. "I only do what is necessary so I don't get injured. I haven't been in the gym for three-and-a-half months and I'm very happy about that.

"But it's nice after you get up at four in the morning to work out for eight hours and fight and stretch and do all this stuff, because it's part of your job and then it makes it easy. But I'm not doing that when I'm not working."

Jeremy also addressed his recent admission that he accidentally took Viagra on a long haul flight.

The star mistook the erectile dysfunction medication for a sleeping pill when he was travelling from Los Angeles to London.

Perhaps unsurprisingly, he wasn't keen to revisit the subject.

"I ain't lying, what do you want to talk about? I said it all there I don't pay attention [to what people have been saying about it]. I shared a story and that's what it was and I'll leave it at that. People can respond to it in whatever way they want to. If I got a few laughs in my pain then awesome!" he quipped.