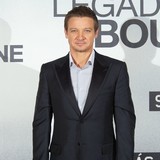 Jeremy Renner thinks actors with a “plan B” are setting themselves up for failure.

The star appeared in The Avengers earlier this year and stars as Aaron Cross in upcoming release The Bourne Legacy.

The 41-year-old star always hoped to make it big in the business and has given movie making his all.

“I would have stopped if I was miserable, but I found something when I was 18 that I wanted to do for the rest of my life, and I continued doing it and growing and falling on my face,” he told Shortlist. “I love the journey, and I think having a plan B is just planning to fail. I still may stop if I feel like I’m not learning.”

Jeremy portrayed Clint Barton/Hawkeye in The Avengers and thought the ensemble film – which also starred Robert Downey Jr., Scarlett Johansson and Samuel L. Jackson – would be a hit as soon as he read the script.

He is pleased to have been a part of such a legendary picture, although he laid down the law about his costume.

“The cast they were assembling was great, and the role was great, and I was like, ‘Hey man, as long I don’t have to wear tights.’ And how cool is it to know that that kind of thing has never happened before – getting all those guys in the same movie? Just unbelievable,” he said, when asked about why he signed on.